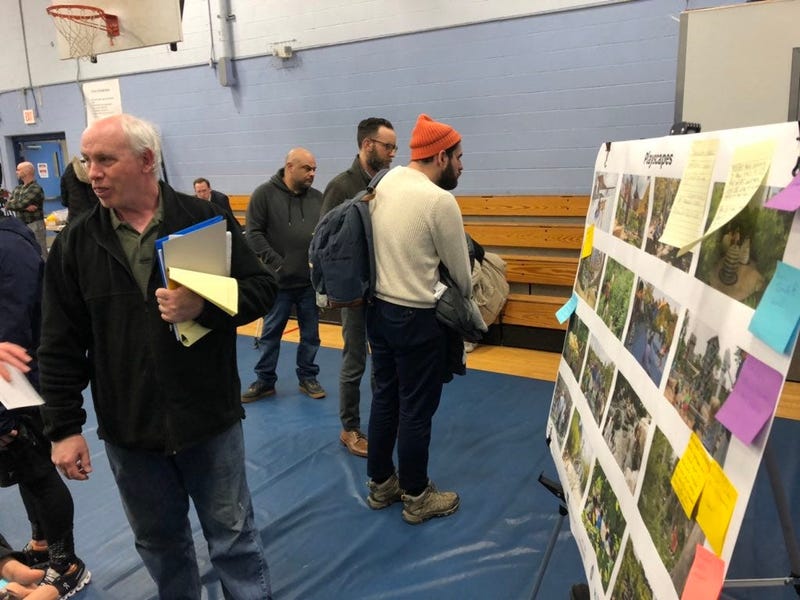 A public meeting at the Belle Center in Buffalo regarding the transformation of LaSalle Park into Ralph C. Wilson Jr. Centennial Park. This stage of the process focuses on designing and revising concepts with public input. pic.twitter.com/1JtSiAb8O3

The Belle Center in Buffalo hosted a public meeting for the planners to reveal some of their findings from the first meeting that took place last month.

"We haven't made a plan yet; this is a moment where we're more figuring out what people do want," said landscape architect Michael Van Valkenburgh. "This is a planning phase, and the designing of the park will happen in more earnest, and after this meeting, we'll come back to Buffalo in several weeks with a schematic plan, and I think we'll get more specific input then."

Based on the feedback received from the first meeting, Van Valkenburgh says the public displayed an overwhelming interest in upgrading the athletic facilities and even building others, and several people at Monday's meeting echoed that sentiment.

"It would be great to see something like a running track," said Molly Jarboe, who's part of a running club. "There's already a lot of room for running, but something that's more accessible to runners for training and that kind of thing."

According to Van Valkenburgh, other desires from the public included more spaces to hold large events, water access, park entrances, food options and increased parking space - to name a few.

However, Jarboe didn't agree with the parking idea.

"A really important thing is more bike racks and things like that for cyclists," she said. "There's plenty of parking, so there's really no need for more cars."

Overall, Jarboe says there's nothing that stands out as a negative in regard to the information the designers are providing, and that was really a prevailing sentiment from most of the people who attended the meeting. However, Christian Parra, who's a community activist with PUSH Buffalo, did share some of his concerns.

"It's important for me to make sure that gentrification doesn't come to our community," said Parra. "I don't want LaSalle Park to become the next Canalside in the sense that it's built for a different class, it's not built for the community that is there now."

"This project can oppress people in the community by taxes increasing, by rent increasing due to the fact that this might bring more value to the community that exists there now," Parra continued. "It's a worry for me, in the sense of gentrification."

Parra did note that there's nothing he sees in the early planning of of this LaSalle Park overhaul that would point to gentrification taking place, but it's something that he wants to monitor, especially as the project moves along.

Van Valkenburgh says this planning phase of the process should be done near the end of spring.

"Roughly, I think the plan is that the park is going to be finished in four years," he said. "I'd say that's not slow, but we're not moving super fast either. I think it's more important to the people behind this project that it's the right park for Buffalo, and that it becomes an enduring, beloved thing."