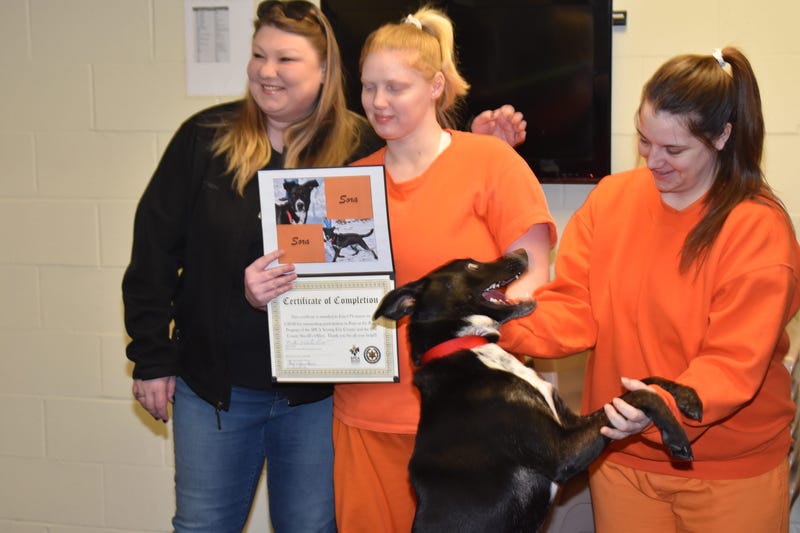 ALDEN (WBEN) - It was all smiles, laughs and barks inside the Erie County Correctional Facility Monday, as female terrier mix Sora put on a show to officially graduate from the Pups at the Pen program.

Pups at the Pen began in 2016, and it's a program run through the SPCA Serving Erie County and the Sheriff's Office. Basically, dogs from the SPCA are sent to live with female inmates where they're trained, taught basic obedience and receive much more attention than they would at a shelter. Inmates learn from a professional dog trainer once a week, and the dogs then become better adoption candidates because of it.

"It's rewarding on our end too because we get rehabilitation value," said inmate Alicia Szczublewski. "In such a down situation being in jail and stuff, they bring you up. They're therapeutic for us just as much as we are for them."

What made Monday extra special is that Thomas Diina, superintendent of the Erie County Sheriff's Jail Management Division, has decided to adopt Sora and have her become a permanent part of his family. Diina had to put his previous dog down, and he wasn't sure that he was ready to move on quite yet.

"I always get a picture of the dogs when they come in from the SPCA for the program, and this one immediately reminded me of Jake - same facial markings, shape of the head - she's a little smaller than Jake but really reminded me of him a lot," Diina began. "I thought about it but then was like, 'Nah, it's too soon - I'm not ready.' Then about a day later, the undersheriff sends me the same picture then say, 'Looks good for the Diina household.' So at that point...I'm going to come out and meet her. I came out, played with her a little bit and then immediately put the ball in motion to get her adopted."

Aside from his personal experience, Diina says this program has been a phenomenal win-win for everybody involved, including the dogs.

"It just shows that we're committed to providing inmates with opportunities to better themselves while they're in custody," Diina continued, as he now reaps the benefits of having an already-trained dog. "Being in jail is a very negative experience. Having a dog that you're caring for, training and socializing with, that can really kind of reduce the inherent anxiety of being incarcerated, so it's a win for everybody."