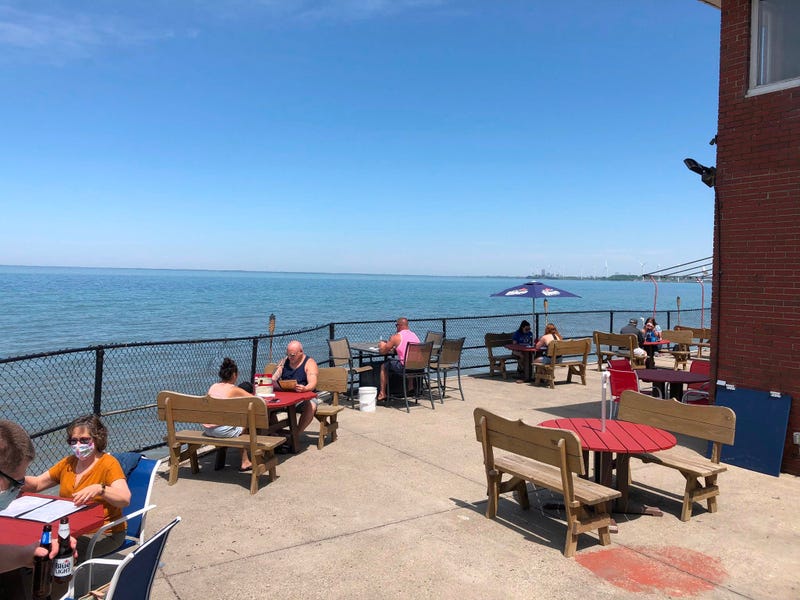 “The fact that it came at us out of left field was a little bit of an issue about us being ready to go,” Brendan Biggane, owner of The Byrd House in the Village of Orchard Park, said. “I got 18 hours notice. We deal with a fresh product that has to be in the building and has to be ready to go. It has to be ordered and has to be packed into a truck and it has to be delivered to you and prepped once it gets into the building. There’s a lot of moving parts before that hamburger hits your table as far as what it went through to get there.”

The Byrd House is aiming to open up on Friday for lunch. Even then, Biggane said they’ve had to adjust their limited outdoor seating. They will now have seven tables, with some even placed in front of a retail shop next door. He said they received permission by village government to expand their seating along the sidewalk.

It was a beautiful day for a lot of people to take in outdoor seating. For all, it’s their first time going to a restaurant in months. pic.twitter.com/RXPXgCUsBv

Still, the limited outdoor seating presents new challenges for businesses as they try to navigate through an unprecedented situation. Biggane now has to contemplate how many employees should come back to his restaurant. He also has to wonder when to bring back his full workforce of 35 employees.

“We’ll probably still be running with a skeleton crew as we have been for take-out. As the restrictions ease, we’ll be calling people back in. Hopefully, the fact that we’re up and running now makes things a little easier to hit stride on (June 16), we’ll be ready to go and everybody is in the building and ready to go.”

He and virtually all restaurant owners have marked June 16 on the calendar because that is the earliest that restaurants and bars in Western New York under the reopening guidelines. June 16 is the earliest date that phase three can begin.

Biggane is not the only restaurant owner who is confused about specific rules that New York State will have for restaurants come phase three. Aileen Hoak, co-owner of Hoak’s Restaurant in Hamburg, speculated that the reopening of outdoor seating will allow the state to receive feedback from business owners, which could then give more clear guidance.

“Hopefully by phase three there will be a stronger set of guidelines,” Hoak said. “Maybe this is like a scrimmage.”

But she acknowledged that not all restaurants are the same and that there will be difficulties for some restaurants to have their liquor license apply to a spot like a parking lot.

Hoak’s Restaurant opened their doors on Thursday to customers for the first time in months. Several of the patrons told us that it didn’t matter that some food and drink options were available. They were just happy to have the option to go to a restaurant again.

Their decision to open, though, was a difficult task. Hoak said she lost sleep on Wednesday night because of the effort it would take to open.

“We’re very fortunate to have a lot of family members and employees that would come back to volunteer,” she said. “Most of them were here at 8:30 a.m. making the correct measurements for six-feet apart, chair-to-chair. We’re very lucky to have loyal employees. It’s like a family here.”

Hoak and her staff all wore masks while serving customers and took several extra steps to clean off menus after they were used by customers.

Some restaurants are left with no choice but to wait until phase three. Even then, there are concerns. Mulberry Restaurant, for example, cannot physically do outdoor seating because of its location, but owner Joe Jerge said that even if they open at 50 percent capacity, they may still lose more money.

He has no idea when he plans to reopen his restaurant.