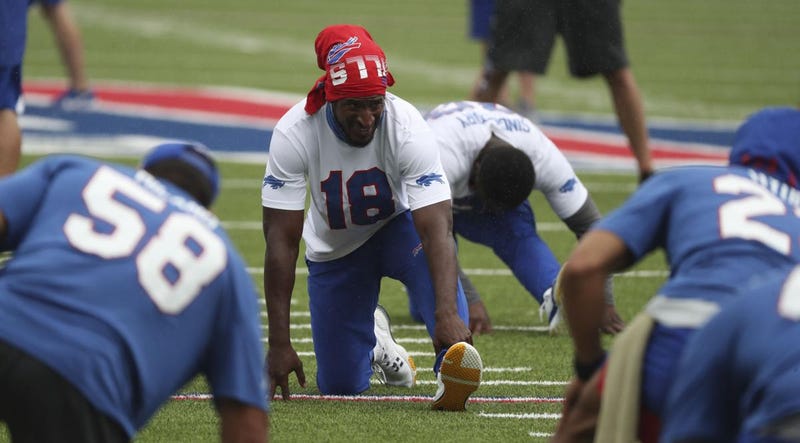 BUFFALO, N.Y. (WBEN/AP) — Receiver Andre Roberts and safety Dean Marlowe were back with the Buffalo Bills on Sunday, a day after being cut.

The two were signed and added to the 53-player roster after the Bills freed up two spots by placing starting guard Jon Feliciano and rookie receiver Isaiah Hodgins on injured reserve. Feliciano is expected to miss another six weeks with a torn pectoral muscle, and Hodgins was bothered by a shoulder injury in training camp.

Roberts doubles as Buffalo’s punt and kickoff returner. He’s back for a second season with the Bills and 11th in the NFL. He earned an All-Pro special teams selection in 2018, and was voted to the Pro Bowl in each of the past two seasons.

Marlowe returns for a third season in Buffalo after establishing himself as a primary backup to Micah Hyde and Jordan Poyer. Buffalo was down to just three safeties after cutting Marlowe.

Buffalo also signed 17 players to its practice squad, including running back Christian Wade who is exempt from being counted on the roster because he is part of the NFL’s International Player Pathway program. The 29-year-old Wade played professional rugby in his native England, and was assigned to the Bills by the league last year.

The other 16 players signed to the practice squad were all players cut by Buffalo on Saturday. They include former Canadian Football League receiver Duke Williams, and linebacker Andre Smith, who was acquired in a trade with Carolina last week.