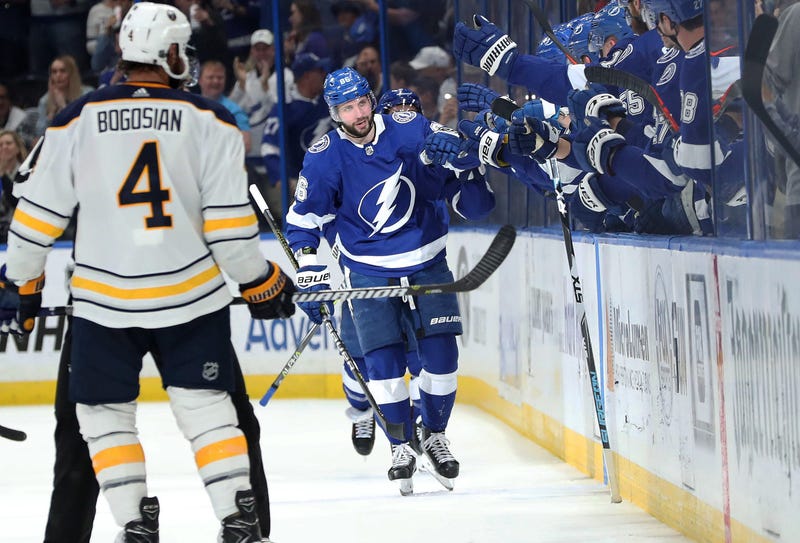 TAMPA, Fla. (WBEN/AP) — Nikita Kucherov is keeping exceptional company in the NHL record book — the kind of crowd that could fill out a wing at the Hall of Fame.

Kucherov became the fastest player to 100 points in a season since Mario Lemieux, and he and Steven Stamkos scored in the shootout to lift the Tampa Bay Lightning over the Buffalo Sabres 2-1 on Thursday night.

"That was a special moment," Kucherov said.

The only other Lightning players to reach 100 points in a season were Vincent Lecavalier (108 points) and Martin St. Louis (102) — this is Kucherov's second straight season at that marker. He's the first player in franchise history to record consecutive 100-point seasons and just the seventh player to do so in the past 20 seasons.

The 25-year-old Kucherov is also the fourth Russian-born player to get there, matching Alex Ovechkin, Evgeni Malkin and Pavel Bure.

Kucherov has at least 30 goals in four straight seasons.

"I think I quit getting impressed at the start of the year," Johnson said. "It's just expected now."

Tampa Bay needed Kucherov's contributions on Thursday to push past a desperate Buffalo team looking to stay in the playoff picture. Since ending a 10-game winning streak in Tampa on Nov. 29, the Sabres have won just 11 games and have fallen six points back of the second wild card in the Eastern Conference with 21 games left.

The Sabres held their own against the league-leading Lightning, grabbing a 1-0 lead on Rasmus Dahlin's goal with 1:47 left in the first period after firing 17 shots on goal.

"I just liked the desperation, emergency and the emotion that we brought to the game," Buffalo coach Phil Housely said. "Guys were playing for each other. We played really solid tonight against a talented hockey team."

Stamkos notched the deciding goal in the shootout, and Kucherov clinched it in the third round.

Tampa Bay is the fifth team in the past 40 years to record two points streaks of at least 12 games in the same season.

NOTES: Lightning D Victor Hedman returned to the lineup after missing Tuesday's game at Philadelphia with a lower-body injury. ... Buffalo G Linus Ullmark was originally scheduled to start but the team said he suffered a minor injury during the morning skate but was available to dress as the backup. Housely said Ullmark will be evaluated on Friday but didn't think the situation was long term. ...Tampa Bay allowed the opening goal of the game for the first time in seven games. ... Buffalo D Matt Hunwick returned after missing one game with lower-body injury. ... The Lightning have allowed two-or-fewer goals in five consecutive games.