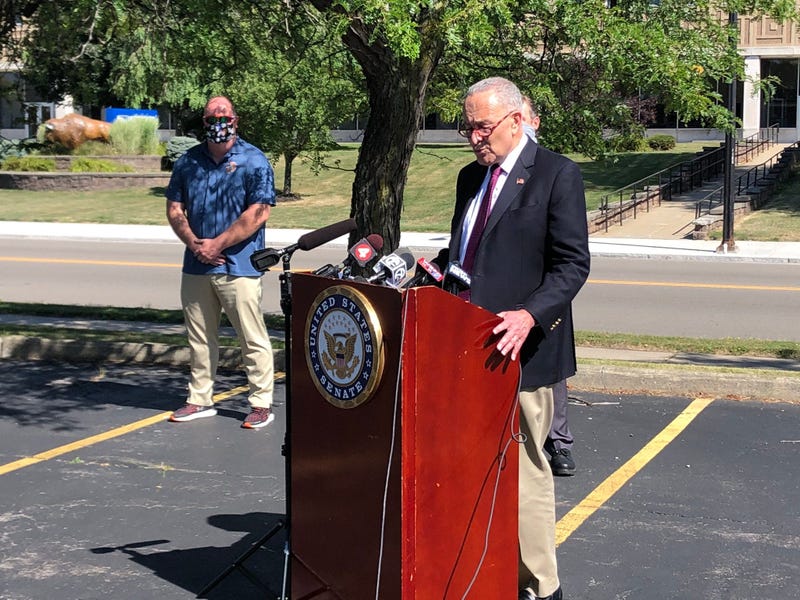 August 13, 2020 08/13/2020 6:25 pm
BUFFALO (WBEN) - Senator Chuck Schumer made an appearance in Buffalo on Thursday morning to call for more funding for the United States Postal Service.

NOW: @SenSchumer is holding a press conference to talk about Western New York’s postal hubs, which he says are facing massive cuts unless they receive COVID-19 relief from the federal government. @NewsRadio930 pic.twitter.com/J4w9qlUvRR

Schumer says that a lack of coronavirus federal aide Western New York's postal engine could fizzle, which would have an obvious impact on the election, jobs, businesses, as well as mail pickup and deliveries.

"Elections are coming up, and so many people will vote by mail, we need to make sure that those ballots get to the election boards on time, so postal is more important than ever," said Schumer. "The cutbacks will mean that people won't get their medicines, won't get their social security checks, won't get their other necessities...but it also puts into jeopardy - jobs - good paying jobs, union jobs."

Specifically, Schumer believes that Western New York's postal hub, along with the region's 6,093 USPS workers and ordinary door-to-door services could face a massive axe if the Trump administration doesn't negotiate a coronavirus relief bill, as such negotiations are currently on pause in Congress.

"A place like Buffalo will feel the results of of inaction first," Schumer continued. "We're here to make a case for the administration that they have to meet in the middle and negotiate on pandemic relief for the USPS. Second, to urge USPS leaders like Louis DeJoy to back this place up - the whole of Western New York depends on it."