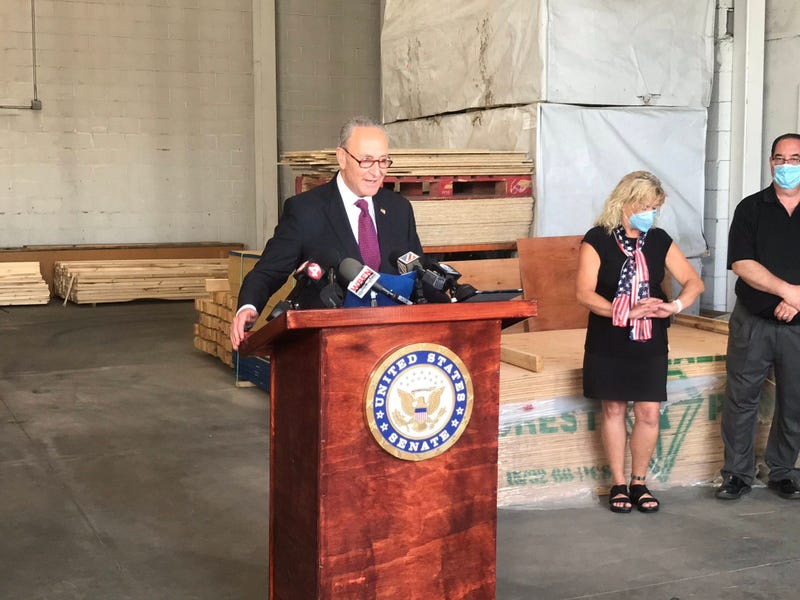 Buffalo, N.Y. (WBEN) – Standing inside the loading dock of Partners Packaging in South Buffalo, Senator Charles Schumer announced the inclusion of an extension of the popular Paycheck Protection Program in the next federal stimulus legislation expected to pass Congress later this month.

“One of the things we’re most worried about is our small businesses.  They are the backbone of the local economy here in Western New York,” said Schumer.

“They don’t have the cushion,” said Schumer in referencing small businesses like Partners Packaging and hundreds of others like them in the region.

When the PPP was initially passed, it paid for employees at businesses with fewer than 100 employees for eight weeks and also covered a percentage of non-employee costs for the businesses who were approved.  A shorter five week extension followed and now that COVID-19 has extended well beyond that time period, Schumer is announcing bipartisan support for a further extension of the program.

The proposed legislation would provide much-needed relief to small business owners by extending the PPP loan period to the end of the year and providing the option for a second PPP loan for eligible small businesses that are in need of additional assistance to survive.

Additionally, the legislation will allow for businesses to access funds worth 250 percent of monthly payroll costs, up to a maximum of $2 million. Small businesses and non-profits with fewer than 100 employees, sole proprietors, independent contractors, self-employed borrowers, and rural and historically underserved communities will be eligible for this second round of assistance, in an effort to get critical federal aid to the most in-need businesses that have lost 50% or more of revenues due to the pandemic.

“We want to help our small businesses,” said Schumer as he stood alongside Buffalo Mayor Byron Brown, Erie County Executive Mark Poloncarz and the leadership of Partners Packaging.

Schumer expects Congressional action on the next round of stimulus and the PPP extension sometime later in July.