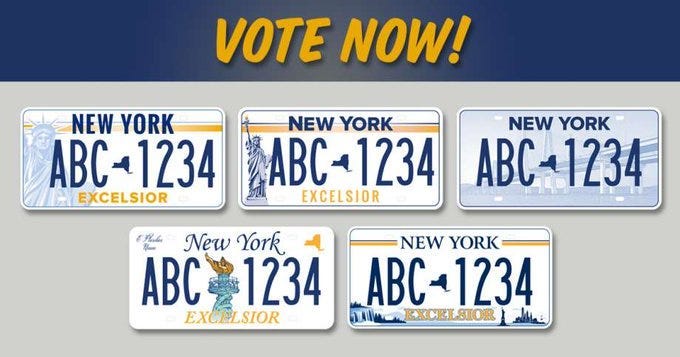 (WBEN) - New York State may be walking back the new requirement that anyone with a license plate more than 10 years old would have to turn it in for one with a new design.

The Governor's office released a statement to WBEN, saying that idea is now scrapped.

“As the DMV commissioner said weeks ago, this proposal isn’t going forward as we have committed to working with the legislature to create a plan that ensures plates are readable by law enforcement and cashless tolling systems and creates a process where plates older than 10 years are inspected and, if still readable, can be kept," said Rich Azzopardi, senior advisor to Governor Cuomo, in a statement.

Though the statement says that the decision was made weeks ago, no announcement of the change in policy was made. When asked about the policy in an interview with the Buffalo News on Tuesday, Cuomo maintained that new plates are needed because so many are worn out.

The statement came out just hours after a Siena College poll showed strong opposition to the plan, with respondents saying by a 2-to-1 margin that they disagreed with the requirement to turn in old plates.

"Why Siena would spend its time polling outdated information is beyond me,” Azzopardi said.

The change in tone was news to state Republicans, too.

“Andrew Cuomo buckling on his license plate tax is a win for the taxpayers," said State Republican Party Chairman Nick Langworthy. "It shouldn’t take a poll to tell the Governor what is blatantly apparent:"

In late August, DMV Commissioner Mark Schroeder said he would be open to scaling the requirement to turn in old plates and purchase new ones back, but did not say that there was an official change in policy.