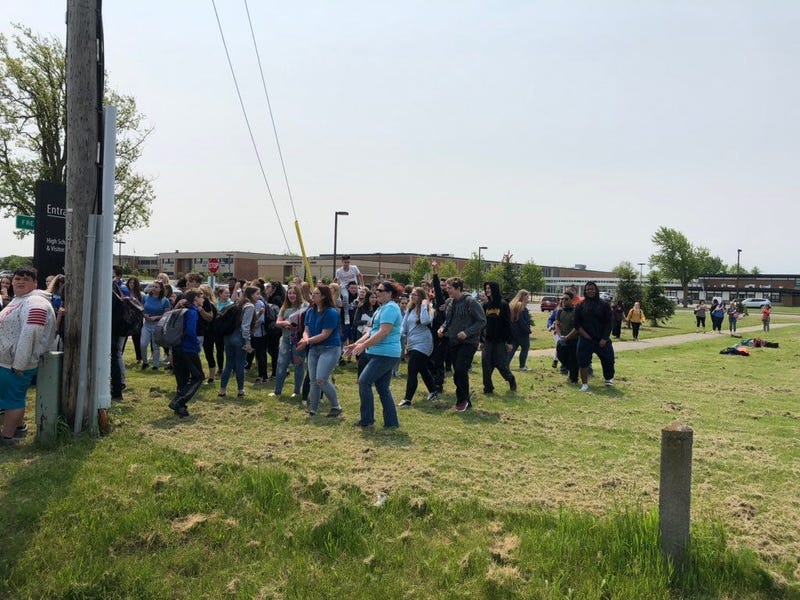 SANBORN, N.Y. (WBEN) - Students and parents at Niagara Wheatfield High School are outraged over the district's handling of a student at the district.

The student in question was convicted of the rape of one of his classmates on May 23. However, the district said they weren't notified by Niagara County Courts until Thursday afternoon. The rapist has since been removed from the classroom by the school and cannot be on school property or attend any school functions.

More than 100 students planned a walkout on Friday afternoon at the high school, though were told by school administration that there would be "consequences" if they left.

Leslie is an advocate for her daughter. She said she notified the school a week ago of the guilty conviction. pic.twitter.com/szxDpJbQ9h

"This walkout was so he would finally be taken out of our school," one of the student organizers told reporters. "A year after it happened, he was still walking around our school. All of us girls are in danger to what might happen to us. We needed some answers and some things to be done."

Students who protested on Friday chanted the victim's name in support of her and some interviews featured the girl's name. WBEN will not publish the girl's name as she is a victim in a sex crime and we did not receive permission.

However, the victim's mother, Leslie, told reporters that the district statement that was released on Friday was not accurate.

"I am saddened and appalled at how the district has handled this entire situation since day one," Leslie said. "And justice piled on top of the despicable act against my daughter makes her a victim over and over again."

Leslie said that the rape conviction happened on May 23 and she personally notified the school principal about the plea the following day. She alleges that the principal said the student would not be removed from the school, despite the guilty conviction.

Prior to the walkout, the district said over its loudspeaker that "justice has been served".

Here’s some of the scenes of the walkout. A parent also sent me this picture saying that teachers were blocking doorways so the students could not leave. pic.twitter.com/cQ2Lm7g8Jo

Some parents picked up their children and took them home for the day as a result of the walkout.

"I am proud of each and every one of these kids standing out here sticking up for their friend," Jennie Rowland said. "If I were a student, I'd be right here where I'm at right now."

When asked for her reaction to the district letting the rapist attend the school, Rowland responded "Shame on you".

I just got this video sent to me from today’s walkout. I do not know what led up to it or what happened afterwards. pic.twitter.com/TfHjSB80HF

The above video shows a student being grabbed by Lewiston Police Chief Frank Previte. In a phone call to WBEN, Previte said that student was never arrested. In the moments leading up to the video, students were told to either return to the school or leave for the day. The student flailed her arms around and swore at police officers, but never struck the officers. She later apologized after she calmed down once inside the school.

Students and parents allege that school faculty tried to prevent the children from leaving the school by blocking the exits.

Tracy Poe, who had two parents attend the school, said that she sent her two kids out of the area as a result of the incident.

WBEN reached the school superintendent by phone on Friday morning, but he declined comment.