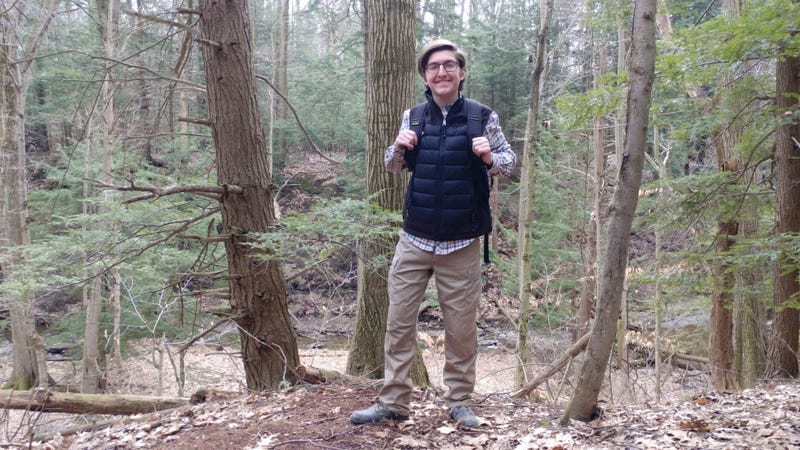 (Mike Pesarchick - WBEN Intern/Canisius College student) - What do you do when you’re 21, COVID-19 has shut down your college, the world is hurdling towards economic recession, we have no March Madness and Tom Brady has signed with Tampa Bay?

In my case, I took a page from Ralph Waldo Emerson’s playbook and took a hike.

My girlfriend and I drove about 30 minutes south of Buffalo to Franklin Gulf Park, an undeveloped 631-acre state forest a few miles outside of Eden. It has some of the best trails I’ve been fortunate to hike in Western New York, with trails feet away from a 100-foot drop into a gorge carved over time by a small stream.

There are waterfalls, rocks, ruins and plenty of wildlife to admire. It was a needed break after one of the most turbulent weeks I’ve ever experienced.

I remember sitting in Philosophy 300 back in January, talking with my friends about this “coronavirus” thing that was busy spreading across China. I distinctly remember laughing it off; we were all worried when Ebola showed up in Texas a few years ago, I thought we would be fine.

Funny how things change, no?

Two months later, myself and the rest of the staff of The Griffin at Canisius College (finest student-run newspaper in Western New York!) were frantically working on covering some breaking news. The college was suspending face-to-face classes and going online until at least Easter because of the virus I wasn’t concerned about.

For our tiny paper, this also meant suspending print operations for most of the year. Some of our staff would be travelling home halfway across the country.

As a journalism major, The Griffin has been the focus point of my three years at Canisius. Our staff has tackled some pretty big stories on campus, from a club mishandling thousands of dollars of funds to a brand-new fitness center on campus. We’ve argued, partied and grown together into what I think is a little family.

We planned to be back in April, just in time to put out our Sesquicentennial edition to celebrate Canisius’ 150th anniversary. We held our meetings as usual and even put out a storyboard to plan what we would write about.

On Tuesday, I went back to the Griffin office on campus to grab some books and to wipe down my desk and conference table with Clorox wipes. Not because we were sick, but because I thought it would be good due diligence. I locked up expecting to be back in a month and went on to my job in the sports department at The Buffalo News.

Then, Thursday afternoon, we found out we wouldn’t be coming back this semester. President John Hurley informed everyone that the Academic Continuance Plan for online classes would continue through the end of the semester. It was something we knew was coming but hoped wouldn’t.

I’m a junior. I still have a year left of the college experience. But I know of many who were looking forward to their last year, the senior celebration party, the graduation ceremonies with their friends. All of that is cancelled. They will finish their classes online and walk off into uncertainty. I won’t see some of my Griffin friends again this year, possibly ever. There’s a looming sense of emptiness hanging over the rest of the semester.

Even my brother, a senior at St. Joe’s, won’t be able to travel to Rochester for an international robotics competition he and his friends have been preparing for since January. Naturally, these problems are small compared to potential economic meltdown but for us young adults just getting out there, they are big things on our plates. After all, we learn from experiences – what can we learn about ourselves and the world if we can’t get out an experience things?

I think we as a bunch of 20-somethings have a sense of invincibility that comes with the first tastes of freedom that college gives us. That’s why idiots have been filmed on Twitter still partying en masse on spring break, willingly not giving a damn that they might be contracting (and passing) the virus on.

They don’t believe they can be affected (whether or not the virus does or not is moot) so why change their plans?

Which is where my hike comes back into play. In his essay on Nature, Emerson wrote that nature is a place for those to escape the doldrums of everyday life. The sky and woods produce an “eternal calm” that allows us to become human again. It’s a reminder that we are pretty small all things considered, and taking some time to think

The 24-hour news cycle is something I know very well. The trails at Franklin Gulf helped me escape it for a little while with the sounds of catbirds and waterfalls and fresh clean air. Maybe it won’t help cure the coronavirus but for a 21-year-old with a few dollars in his pocket, it was plenty of relief from a lot of chaos.

My point is, getting out into the woods let me take some space from the upheaval this past week has brought. Social distancing doesn’t mean sitting inside all day, there aren’t many other people on those trails.  Maybe you’ll have to miss out on some events coming up now, but that doesn’t mean there won’t be more for the rest of your life.

If anything, the trails and nature will always be there too, a place to get away from whatever else life throws at you and a reminder that you aren’t unstoppable – you’re a small part of a bigger picture.

We’ll get through this, but to my fellow 20-whatevers out there, you’re not invincible. Try a hike and maybe you’ll see what I mean.

Oh, and wash your hands.