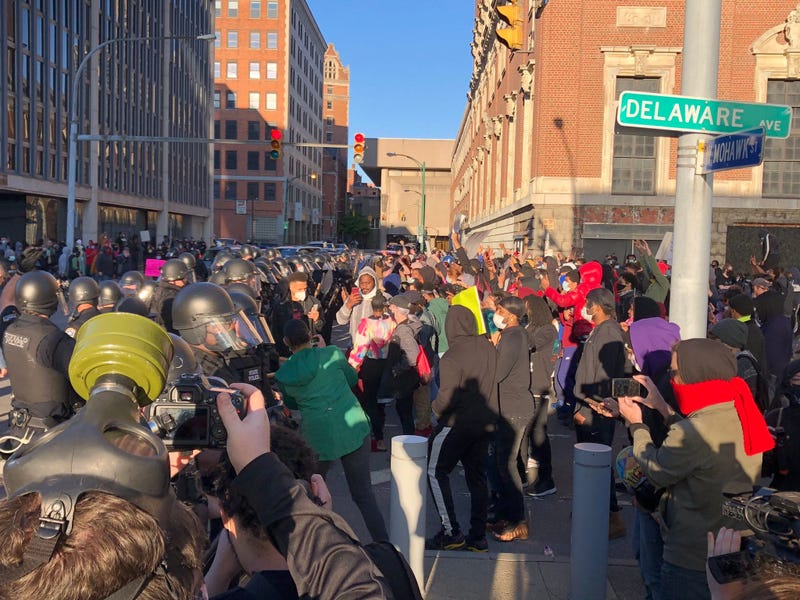 More arrests are expected, including the person who tried to set a fire inside Buffalo City Hall, a person who struck a local reporter, others who damaged property throughout the region, and those who organized the riots.

Erie County DA John Flynn said that only one rioter stayed in jail overnight. Daniel Hill was allegedly one of the looters who broke into a liquor store and threw bottles and other objects that caused alarm and risk to other officers, according to a press release from Flynn’s office.

Hill, 21, is also accused of throwing multiple liquor bottles at Buffalo Police officers who suffered minor injuries. Hill then later punched, kicked, and elbowed officers while was under arrest.

Following his arraignment on Sunday, Hill was released because of the state’s controversial bail reform laws.

Seven of the ten people arrested were charged with misdemeanors.

Hill was held overnight because he was arrested for a D-felony. He is due back in court on July 15. The district attorney said the two other people who were arrested face felony criminal mischief laws.

The arrests have, once again, highlighted New York State’s controversial bail reforms that took effect at the start of the year. Lawmakers in Albany adopted the reforms as part of the annual budget last April.

“I’m all for criminal justice reform,” Flynn said. “I think I’ve shown that. The past two and a half months here, how many DAs have done what I did? I’ve let out prisoners in the holding center left and right…to help reduce the population there and the potential spread of the virus…but when you have bail laws that are black and white and give no leeway to judges at all? That’s a problem.”

A judge has no discretion whether or not to set bail for Hill’s alleged crimes.

“He’s home right now,” Flynn said. “I’ve got a big problem with that.”

Law enforcement railed against the bail reforms last year as did several local municipalities, some state lawmakers, and even Governor Cuomo, who called for some changes.

Assembly Majority Leader Crystal Peoples-Stokes in January defended the reforms, arguing it unfairly hurt poor communities. A request for comment about expanded bail reforms was not immediately returned by the assemblywoman.

"It breaks my heart to hear some of the rhetoric that's constantly coming out about this, and it cannot be coming out because everybody who gets arrested for something non-violent should be in jail, this negative rhetoric is coming out about something else," Peoples-Stokes said in January. "I don't want to speak to peoples' values, but I will want to question why you think somebody should be in jail just because they've been arrested and they haven't been prosecuted."

Flynn said the “overwhelming majority” of the ten people arrested after Saturday night’s riots were white.

Lawmakers expanded the bail statute in April. They added more qualifying offenses that would require bail. However, those changes don’t take effect until July.

“If the judges aren’t doing their jobs, get rid of them. That’s the ultimate protest,” Flynn said.

Flynn said despite the actions of the people who were white, it’s the African-American community that bears the brunt of the criticisms.

Buffalo Police are looking for a man that was allegedly involved in the arson at Buffalo City Hall. Anyone with information is asked to call or text 847-2255.