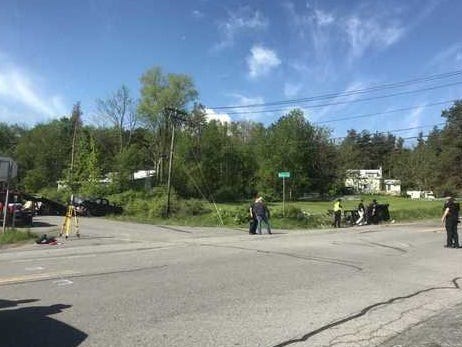 Sheldon, N.Y. (WBEN) - Three relatives were killed and six others were injured in a crash while heading for Niagara Falls on a holiday weekend trip, when a suspected drunken driver's pickup truck hit their SUV, authorities said.

A child of 4 was among the dead, and four other children were injured, Wyoming County Sheriff Gregory Rudolph said.  "Anytime a child is involved — and in this case, we had five — it pulls at you," he told The Daily News of Batavia. "It's a tragedy."

The sheriff's office says the vehicle didn't have child or booster seats.

Rudolph says the Sheriff’s Office 911 Center received calls of a crash with multiple ejections and injuries on Route 20A at Maxon Road in the Town of Sheldon.  The initial investigation by Deputies has revealed an SUV with a family of nine from New Jersey were westbound on Route 20A when a southbound pickup truck on Maxon Road went through the intersection without stopping at the stop sign and struck the SUV.

The SUV had one adult male, three adult females and five children,ages: 14, 10, and three 4 year olds. Two adult women were ejected and pronounced dead at the scene by Wyoming County Coroner Jennifer Prutsman-Pfeiffer and are identified as Ondina Castro De La Cruz- age 47 and Mayelin Brito-Castro- age 32. One of the four year old children was taken by Bennington Ambulance to the Wyoming County Community Hospital for head injuries and died about an hour later.

The driver of the pickup was identified as Richard Sawicki, age 20, of Lackawanna, NY.  He was transported by the Strykersville Ambulance to ECMC and later released.  He was arrested by the Wyoming County Sheriff’s Office for Aggravated Vehicular Homicide, Driving While Intoxicated and Reckless Driving.   Sawicki has not posted bail or bond and is in Jail.  The investigation is continuing and will likely take days or weeks.  Additional charges are expected.

The investigation is continuing and further charges are expected.