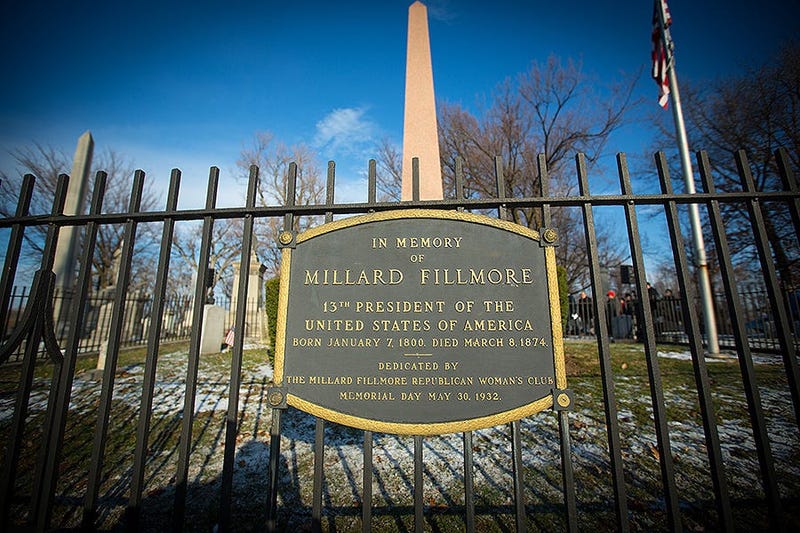 Buffalo, NY (WBEN) UB is removing the names of Millard Fillmore, James O. Putnam and Peter B. Porter from four locations. UB says the decision aligns with "the university’s commitment to fight systemic racism and create a welcoming environment for all."

Putnam Way, a road on North Campus, will be renamed Mary Talbert Way in honor of the Buffalo civil rights pioneer.

Millard Fillmore Academic Center, which houses academic departments, student residences and other services, and is part of the Ellicott Complex, will be known as Academic Center until a new name is determined.

The former Putnam’s Marketplace Eatery in the Student Union will be known as Union Marketplace & Eatery.

Porter Quadrangle, a residence hall that is part of the Ellicott Complex, will be renamed at a later date.

The university will make changes to campus signage and websites prior to the start of the fall semester, which begins Aug. 31.

“Clearly, historical namings on our campus — whether academic buildings, residential halls, interior spaces or thoroughfares — carry important symbolic value,” President Satish K. Tripathi said during Monday’s UB Council meeting. “We want to ensure that these symbols align with our mission — namely, that we are a diverse, inclusive scholarly community. As we consider some of these symbols, we have no intention of erasing our history. However, we can purposefully determine whom we want to honor in this way.”

The UB Council unanimously voted to rename Putnam Way in honor of Talbert, who was a founder of the Niagara Movement, a precursor to the National Association for the Advancement of Colored People. Talbert dedicated herself to improving the lives of African Americans, was a staunch supporter of women’s rights, and served as a nurse in World War 1, among other accomplishments. UB previously recognized Talbert in 1977 with the opening of Talbert Hall, which houses classrooms, support services and eateries.

The UB Council also unanimously voted to remove Porter’s name. The other name changes were approved by UB’s Campus Planning Committee and did not require UB Council vote, according to UB policy.

UB says the decisions come after a separate committee of university leaders convened by Tripathi in 2018 conducted a review of named spaces, buildings and grounds on UB’s three campuses. The President’s Advisory Council on Race, which Tripathi formed in June to address issues of race and culture at UB, endorsed the name changes.

Fillmore was a founder and the first chancellor of UB, serving from 1846 until his death in 1874. A lawyer who also served in Congress, he helped establish some of Buffalo’s most enduring institutions. While the nation's 13th president, UB says Fillmore was  widely criticized for his support of The Compromise of 1850, which included the Fugitive Slave Act of 1850. UB says it recognizes this remains a deeply hurtful decision, especially for African Americans. Previous recognitions of Fillmore by UB, including an annual gravesite ceremony the university stopped co-sponsoring in 2019, were based on his role at the university, not an endorsement of his policies or legacy as president, according to the university.

Putnam was a lawyer and New York State senator who served on the UB Council for 32 years, and was the fourth chancellor at UB, from 1895-1902. During his career as a politician, he held and openly expressed racist views.

Rev. Mark Blue of the Buffalo NAACP says it's the right move. "I commend them for wanting to make sure the disparities and racial inequities are rectified. Even though Millard Fillmore was from here and was president, the north had been one of the racist areas of contention when it comes to systemic racism," says Blue. "I think it's a great equalizer and it's time for racial justice to be ensued."