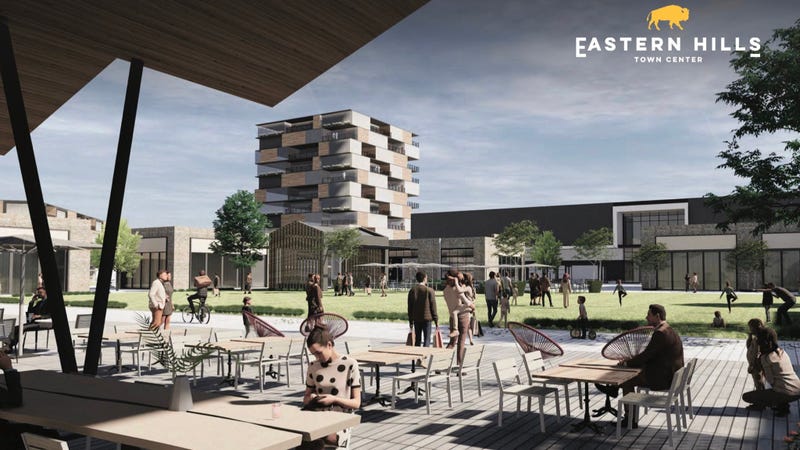 CLARENCE, N.Y. (WBEN) - The master plan of the Eastern Hills Mall into a walkable "urban village" was unveiled on Tuesday night.

Uniland Development Company plans to turn the declining 100-acre mall into a mixed-use redevelopment that features office, retail, residential, medical, hospitality, and recreation. Phase one of their development will feature the design, financing, and leasing throughout next year.

RELATED: An Update on the Boulevard Mall Re-Development

"We've been working on (the concept plan) for over 12 months," Uniland VP of Marketing & Strategic Initiatives Carl Montante Jr. said "It's a big milestone in what will be a 20-to-25 year project once it's fully built out."

The massive re-design of the mall will include more than 1,000 housing units that primarily targets a younger demographic along with some retail, restaurants, office space, green space that includes bike paths, and more.

Montante said that upwards of 3 million square feet, triple of what the mall currently uses, would be phased over several years.

The initial cost of the massive project was listed at $250 million, though Montante suggested that will likely fluctuate depending on what changes are made.

Some info about the planned transformation of the Eastern Hills Mall. The initial concept design was unveiled today and its going to take upwards of 25 years for it to be totally completed. However, parts of it will open in phases. Funding is the next step. Initial plan was $250M pic.twitter.com/nWiSksgtlC

"It's more of a quality of life project for us," Montante said when asked about comparisons to a transformation about the Boulevard Mall about 15 minutes away in Amherst. "We're looking to design and build structures and offer activities so that there's something for everyone. We're looking to attract young professionals both to live and work here. We're also looking to attract seniors who are looking to downsize out of a single-family home into something more manageable and not be tied to a vehicle to go shopping or to a doctor's office or to go and exercise. All of those lifestyle type activities will be on-site here."

Gensler, a San Francisco-based design and architecture firm, was hired by Uniland and Mountain Development Corporation to create the design of the project. Its Principal, Marc Bruffett, said the vision for the Eastern Hills Mall could also include hotels.

"We think that this is going to be an international destination when people are coming to Niagara Falls or shopping from Canada or if they're just residents from the area," Bruffett said. "We think there's something for everyone."

The developers will now partner with the Town of Clarence to hammer out specifics of "phase one" of the project. That's a process that could take up to a year. Montante said that they'll have to see financing during this process.