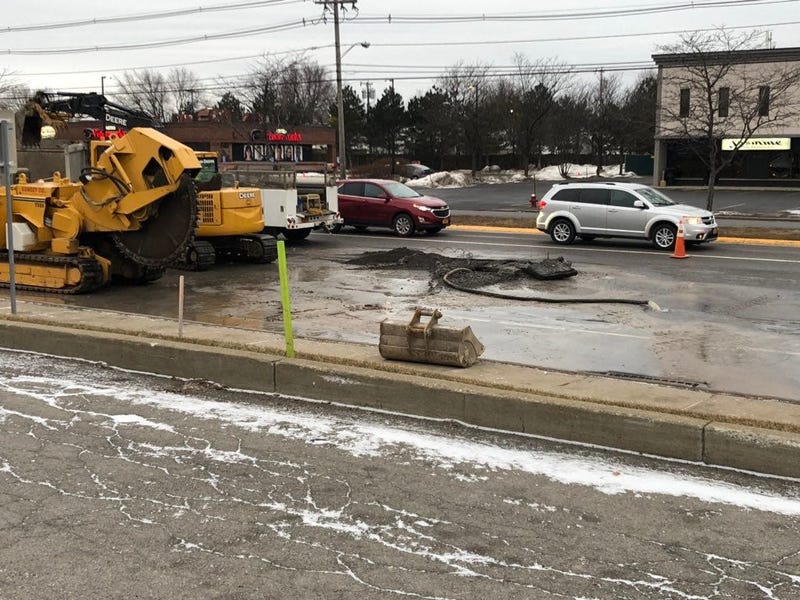 The break was initially reported by the Erie County Water Authority just after 2 a.m. and crews were on scene throughout the morning working on repairs on the northbound end. For most of the day, only the left lane was open between Sheridan Drive and Maple Road.

"We've identified it as a 12-inch cast iron main," Robert Lichtenthal, Deputy Director of the Erie County Water Authority, said. "It's probably a main near 70 years of age. There was no warning or any indication that there would be a problem with this main."

Lichtenthal said he believes the damage is limited to the one section of the pipe. Road excavators dug up a part of the roadway on Monday morning.

The Water Authority released the following statement late Monday:  “The ECWA has completed the water main repair on Niagara Falls Boulevard in the Town of Amherst. The water main was back in full service at approximately 2:30p.m. and restoration work to Niagara Falls Boulevard was completed early this evening. After consultation with the New York State Department of Transportation, traffic control was removed at 7:15p.m., and there are no longer any lane restrictions in the area.”

Another look at the water main break. This repair is expected to last for a good portion of the day. pic.twitter.com/URpDBb8AWI

Excavator now pulling up some roadway that was cut. You can see the water pooling pic.twitter.com/9wjiwK93S5

Because of the changing temperatures, Lichtenthal expects there to be more water main breaks in the coming weeks.