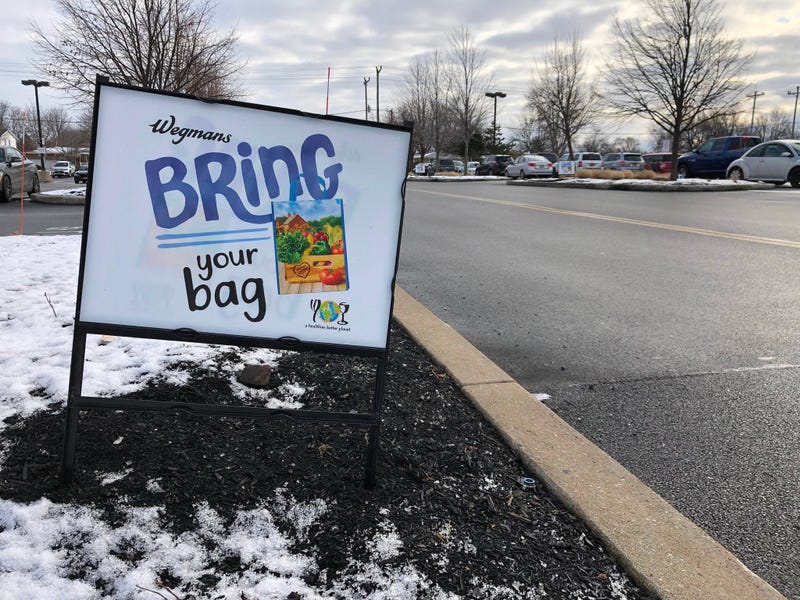 BUFFALO, N.Y. (WBEN) - Wegmans shoppers are ready for the company's plan to eliminate the option of plastic bags at checkout.

"I've bought bags," Cathy from Eggertsville said with a chuckle. "I remembered to bring them in today but I forgot to give it to the check-out girl as I started. By the time I got halfway through the order I realized I had them in my cart so she finished it with those. I think it's going to take a bit (for people to get used to the change)."

Wegmans announced their plan on Monday in advance of New York State's ban on single-use plastic bags on March 1. The ban applies to all plastic carryout bags. Cities and counties are allowed to adopt a five-cent carry-out bag reduction fee. Though Erie County did not implement a five-cent fee on paper bags, Wegmans announced that they will charge five cents per paper bag with proceeds from area supermarkets to benefit the Food Bank of WNY.

The ban does not apply for plastic bags used by a pharmacy to carry prescription drugs and produce bags for bulk items like fruits and vegetables.

"I think (the transition) is going to be difficult for a lot of people," another shopper said. "You have to remember to bring your bags. (I don't) remember every time. I think people are used to using plastic. It's a great thing for the environment. I think it's great getting rid of them because it's very difficult to recycle. I try to make it a point to recycle my plastic bags every time."

But not everyone is on board with the idea of eliminating the plastic bags. David from Tonawanda said he's prepared for the company to make the change and the state ban on March 1 but said the plastic bags are convenient for use as trash bags at home.

"I don't agree with it," he said. "I think they should have left the law alone in my opinion. Now people have to spend money on those bags they might not use...Now they want to (do something similar) with styrofoam. Now costs are going to go up. Who's going to afford this stuff?"

Marie from Buffalo said she always tries to keep the bags inside her car. Occasionally, she forgets them but said she's willing to pay five cents for a paper bag. She said it's crazy that people would be against the plastic bag ban because of the environmental benefits.