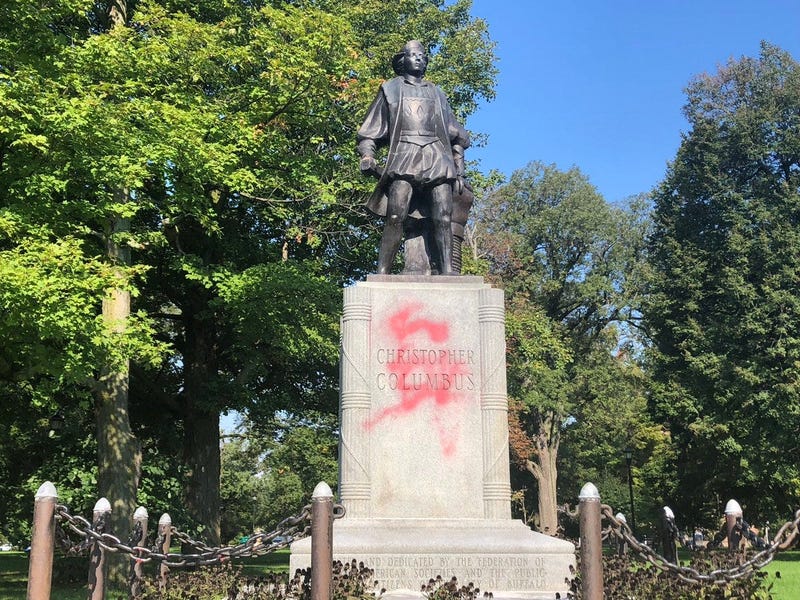 BUFFALO, N.Y. (WBEN) – Will the Columbus Statue at Columbus Park be vandalized again?

That’s a worry for some each Columbus Day as individuals who are upset with Columbus’ actions expressed their displeasure by defacing the statue that faces Porter Avenue in the City of Buffalo.

Last year, the Columbus Statue was vandalized with red spray paint before a planned protest at the park. It was also vandalized in 2017.

“It’s always a problem every year,” Niagara District Councilman David Rivera said. “We encourage people who have strong feelings and objections to celebrating Columbus Day to file an item with the city clerk’s office. That will afford them an opportunity to be heard in Common Council. Obviously we ask they don’t vandalize public property.”

A proposal to remove Columbus Statue and change the name of Columbus Park was introduced in 2017 but died in committee process. Today, there is no bill in the council agenda calling for a similar change.

Some cities in the nation such as Los Angeles and, recently, Washington, D.C. have adopted “Indigenous Peoples’ Day” instead of Columbus Day. North District Councilman Joel Feroleto is open about his opposition to any calls to change the name of Columbus Day in Buffalo.

“It’s something that has to do with the contributions that Italian Americans have made and the sacrifices,” Feroleto said. “Years ago when it was first declared a national holiday in the 1930s by FDR it was very important because they suffered so much when they came here. This was a very important day to (legitimize) the contributions they have made to American society.”

Feroleto urges people to “do something positive” in their opposition to Columbus Day instead of vandalizing the statue.