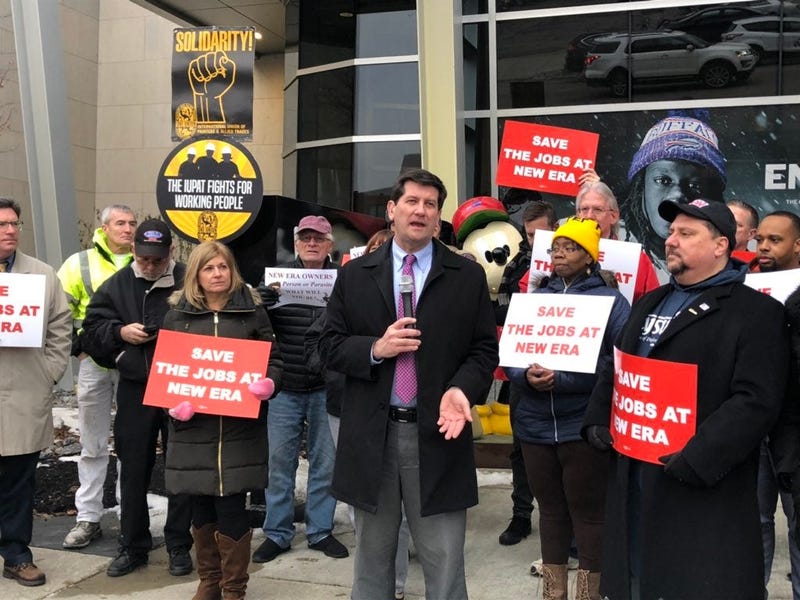 Local labor leaders beginning to gather outside New Era headquarters in downtown Buffalo. They’re protesting the decision to lay off more than 200 workers at the Derby manufacturing plant. pic.twitter.com/qZUL15V3BD

This was one of several demonstrations by local officials and unions held to voice their displeasure with New Era.

"We are here to say: New Era, if you want to be the hometown team, you need to stay home," said Joe Cantafio of the Western New York Federation of Labor. "Until you decide that you are going to put people over profits, we are saying to New Era, 'New Era hats off.' We are going to take our New Era hats off until they decide that they're going to keep the hometown team here at home. The impact that you are having on the community and over 200 hundred workers, when you are making record profits is not fair. Stop putting profits over people."

County Executive Mark Poloncarz has been one of the main local officials to stand with labor, specifically in the case of the Derby plant workers, and he has been at a number of these demonstrations.

"None of us want to be here; it's as simple as that..." began Poloncarz. "We are a better community than this, and I hope the leadership at New Era realized they're a better company than this."

Erie County Legislator Barbara Miller-Williams also made an appearance, and she echoed the sentiments of Poloncarz.

Unfortunately, so far, these rallies have yielded little in terms of results, as President/CEO Chris Koch has not come to the negotiating table.

More from the scene at New Era headquarters: pic.twitter.com/DqrE0SXK1S

However, the local labor leaders say they will continue to fight for their brothers and sisters in Derby until move is finalized.