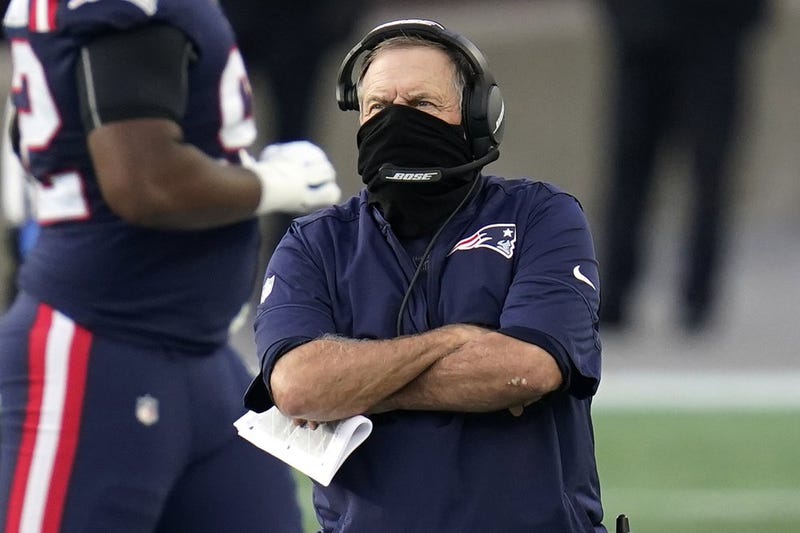 New England Patriots head coach Bill Belichick watches from the sideline in the first half of an NFL football game against the San Francisco 49ers, Sunday, Oct. 25, 2020, in Foxborough, Mass. (AP Photo/Charles Krupa)

As much as the Buffalo Bills defensive end would enjoy acknowledging a changing of the guard taking place in the AFC East seven weeks into this season, Hughes wasn’t prepared to go that far on Wednesday.

At least, not yet.

“I feel you’ve got to take that title away before we can make that statement,” Hughes said as Buffalo prepares to host the Patriots on Sunday.

“So I’m going to hold my tongue because I know I don’t like to put anything out there in the universe and then have to come back and eat crow,” he added. “I will say that we’re going to be ready for this game.”

Hughes’ cautious approach is well-founded even as the roles in this long-lopsided rivalry have been reversed.

At 5-2, Buffalo finds itself leading the division, with the Patriots (2-4) uncharacteristically sitting third, while coming off three consecutive losses — their worst skid since 2000, Bill Belichick’s first season as coach in Foxborough.

The standings and the spread — the Bills opened as three-point favorites — don’t mean much to the team’s longest active-tenured player.

Entering his eighth season in Buffalo, Hughes has been on the wrong end of the scoreboard far too many times in going 2-12 against New England, and 0-12 in games Tom Brady started and finished.

The Bills might no longer have to confront Brady, who is now in Tampa Bay, and went 32-3 against Buffalo in setting the NFL record for most wins against one opponent. And yet, Belichick is still the coach in New England, where he’s gone 35-5 against Buffalo over a 20-year stretch in which the Patriots have won 17 division titles and six Super Bowls.

“It’s still Belichick,” running back Devin Singletary said. “It’s still respect even though they haven’t been playing as well as they want to be.”

The same concern could be raised with the Bills, even though they’re off to their second consecutive 5-2 start for the first time since 1995 and ’96.

Buffalo followed a 4-0 start by losing two straight before eking out an 18-10 victory over the winless New York Jets last weekend, when the Bills’ once-prolific offense settled for Tyler Bass hitting six field goals to match a franchise record.

The Bills have scored just 51 points in their past three games after scoring 123 in their first four.

Buffalo’s once-stout defense is an even bigger cause for concern despite limiting the Jets to 4 yards in the second half last weekend.

The Bills have already allowed 12 touchdowns passing, three fewer than all of last season, and were trampled in giving up a combined 384 yards rushing in losses to Tennessee and Kansas City.

Take away their two outings against the Jets, including a 27-17 season-opening win, and the Bills have allowed a combined 151 points, 2,071 yards, and 132 first downs in their other five games.

It’s no wonder coach Sean McDermott played down the significance of beating the Patriots.

“You’ve got to prove yourself every week in the NFL,” McDermott said. “We’re in late October, early November, and that’s what we’re focused on right now.”

The Bills have much to prove for a team that last won the division in 1995. Buffalo also hasn’t won at least six of its first eight games since getting off to a 7-1 start in 1993, the last of the Bills’ four-year run of Super Bowl appearances.

Hughes understands what a win over the Patriots would mean in the context of the division race.

“That’s what we talked about is taking care of our division, and then getting to the playoffs,” Hughes said. “It’s huge for us because (New England) is the next opponent. And they’re in our way of hanging the AFC East banner.”