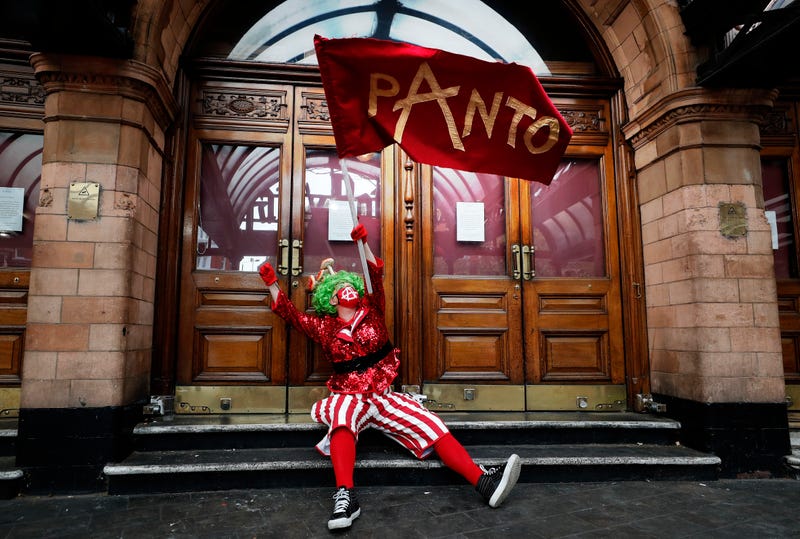 LONDON (AP) — As much of Britain’s economy emerged from the coronavirus lockdown, its theaters stayed dark, with performers and staff unwillingly idled.

So they made a song and dance about it.

Scores of actors, technicians and theater workers led by pantomime “Dames” — male actors in fabulously eccentric drag -- marched through London’s West End to Parliament to the beat of showtunes Wednesday, asking the government for a plan to bring theaters back to life.

The demonstrators were highlighting the prospect of a bleak Christmas season without the hundreds of pantomimes usually staged across the U.K.

Pantos — a raucous blend of fairy-tale plots, topical references, slapstick, song, dance and innuendo — are as much a part of the British holiday season as turkey and presents. The star characters are the Dames, bawdy female characters played by men.

“This is probably the only time I’ll get into a frock this year,” said actor Tim Hudson, who in normal times would be preparing for his 21st panto season. Instead he donned a patchwork floral dress and auburn wig and joined the protest.

He said the theater "is one of our greatest cultural assets. It’s in deadly peril at the moment.”

The coronavirus pandemic brought down the curtains at Britain’s theaters overnight in March. A few are tentatively beginning to reopen, with reduced capacity and at a financial loss. But rising coronavirus infections and the threat of new local lockdowns threaten even this fragile recovery.

Some fear Britain’s world-renowned theater industry — which sold 1.3 billion pounds ($1.7 billion) worth of tickets in 2018 — will be wiped out if the government doesn’t provide a lifeline.

It ls already too late to save this year’s pantos, which many theaters rely on for essential income.

“Pantos sustain whole years,” said Dec Togher, a technician at a West End theater. “It’s like a game of Kerplunk — if you take this stick out, the whole thing collapses.”

Many theater workers and artists are also struggling to survive.

When Britain went into lockdown, the government stepped in to pay the wages of millions of furloughed employees. But most people who work in the theater are freelance and did not qualify. Another program was set up to help the self-employed, but actors’ union Equity says less than half of its members managed to qualify.

Britain is bracing for a spike in unemployment as job support schemes are wound down over the next few months. In addition, many arts workers have been stung by the Conservative government's suggestion that it will only support jobs that are “viable.”

“The theater industry is not just a hobby,” said Helen Clarkson, a stage manager with two decades of experience. ”This is what we do. We need the government to take notice that we are a vital part of the economy.”

Unions and theater-operating groups want the British government to provide more support for workers and artists, as governments have done in countries such as France. Most of all, they want the government to set a date for reopening, even if it’s months away.

For now, theaters can operate if they can implement “COVID-secure” measures such as social distancing. That is both financially unviable and physically difficult in London’s largely Victorian playhouses.

Some theaters are trying to make it work. London’s Bridge Theatre reopened in August with about 25% capacity. The National Theatre plans to reopen one of its three auditoriums in late October.

The Nimax group of six West End theaters will reopen starting Oct. 22, with social distancing, temperature checks and other measures. The lineup includes solo shows and “Six,” a musical about the wives of Henry VIII whose six-person cast meets the government's rule limiting gatherings to six people.

Other Nimax shows such as “Harry Potter and the Cursed Child” and the musical “Everybody’s Talking About Jamie” will have to wait until social distancing rules are eased.

“We know audiences are keen to come back, because the ticket sales are great,” said Nimax chief executive Nica Burns. “That was a relief.”

She says operating at a loss is a better option than laying off her venues' 200 full-time workers. But it’s far from a return to normal.

“We cannot open the bulk of theaters in London,” she said. “It’s impossible to open the big shows — you can’t social distance onstage.”

Burns says the arts were not on the government’s “front burner” early in the pandemic but she thinks ministers are listening now.

“We want to earn our way," she said. "We are a successful industry and we don’t want to have our hands out all the time. We want to be working.”