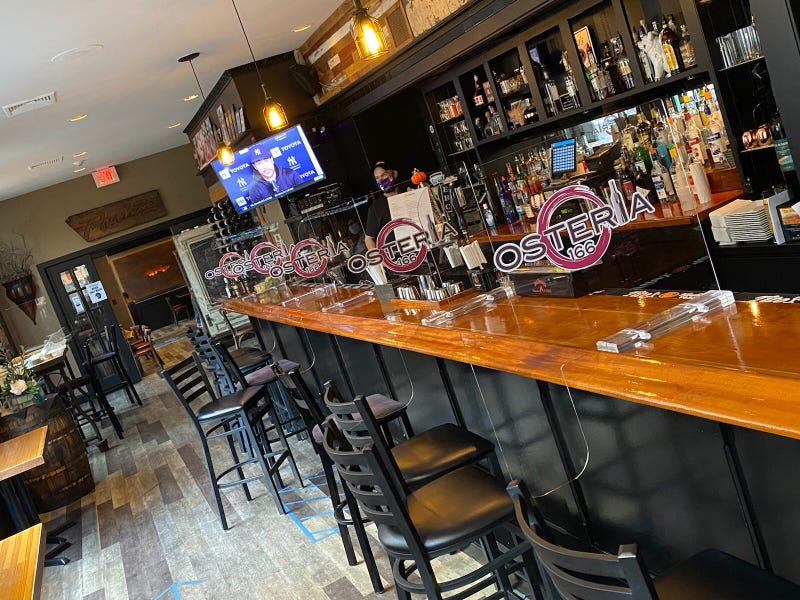 BUFFALO (WBEN) - With winter months closing in, restaurant owners have to get creative in coming up with ways to both extend the outdoor dining season and maximize their available indoor space in preparation for the cold and snow.

Last week, WBEN spoke with Osteria 166 owner Nick Pitillo to find out how they're planning to attack winter, as the state's coronavirus guidelines stipulate a capacity limit. He mentioned that he's working with Professional Plastics in Orchard Park to customize dividers that can be used to separate people at the bar and even separate booths.

"You see those two tables right there - I can't seat both of those currently, but if I had a plastic wall between them, I can," said Pitillo.

In fact, Professional Plastics Director of Manufacturing Matthew Lee said his phone has been ringing off the hook as other local restaurants are trying to follow suit.

"I'd probably say in the last month or so and probably really more in the last two weeks, and I think we're just scratching the surface there," said Lee, regarding the number of incoming calls. "You have the winter months that are going to be coming, and what's happening is those restaurants are trying to get to 100% capacity to stay open."

Branch Manager Eric Snow said there has been incredibly high demand for their products and services, saying he hasn't seen anything like this boom in business throughout his 40-year career.

"We've seen a super increase in our numbers primarily due to the COVID outbreak, servicing various businesses, schools, pharmacies, and retail stores with guarding and PPE," said Snow, who estimated a 200-300% increase in business.

According to Lee, Professional Plastics typically deals more with the oil and gas industries, as well as aerospace. However, when the pandemic really hit locally in March, the company changed much of the business model, specializing in PPE manufacturing.

"We've at least doubled, if not tripled our employment here at Professional," he began. "We have two locations, soon to be three locations, and we've made over 10 million face shields locally."

While Americans may be better equipped to deal with the pandemic in the coming months, Lee believes plastic guarding be something that carries over into the "new normal."

"I think that there will always be some type of guarding now," said Lee. "I don't know what it will look like, but doing a lot of local schools, we've done over 22 districts from Buffal to Rochester and down to Jamestown, and some of those schools are even talking about keeping the guarding to have when flue season starts. So, I think there will always be something there."