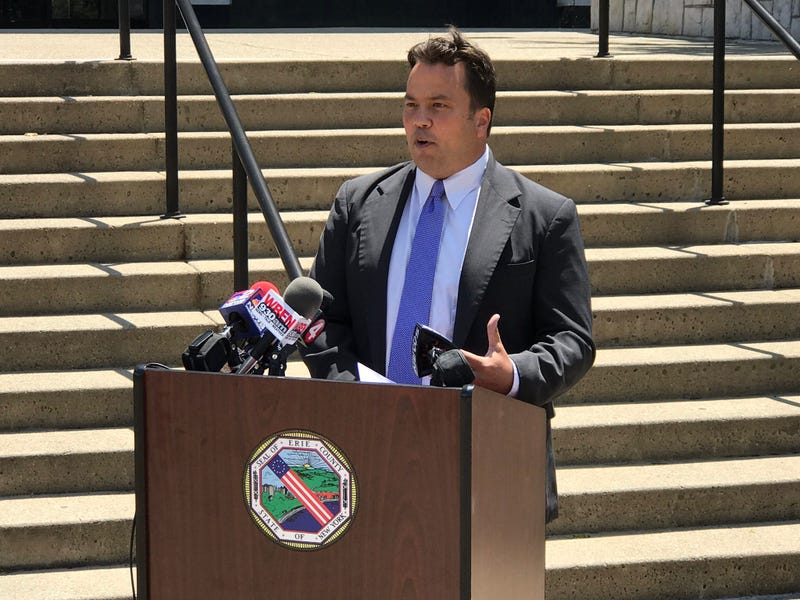 BUFFALO, N.Y. (WBEN) – Erie County Comptroller Stefan Mychajliw is refuting reports that he has not been in his office and called Erie County Executive Mark Poloncarz a “moron” for comments about Mychajliw’s workplace attendance and speculation on if he attended the January 6 riots in Washington.

"I know you can't do the job of comptroller showing up just a few days a month," Poloncarz, the former comptroller, said.
"Stefan Mychajliw needs to come clean on why he doesn't show up for work."

The investigative report by Channel 7 concluded he only worked in his office at the Rath Building an average of five days per month from September 2019 to August 2020. While Mychajliw showed that there are multiple occasions where he does not use his ID card to get into the Rath Building, he did not highlight any dates from September 2019 to August 2020.

However, he showed there are occasions that his secretary buzzes him into the office.

“It hits the door and electronically lets me in without me having to use my ID,” Mychajliw said. “And if I don’t have my ID, security simply buzzes me into the parking lot.”

Thursday’s incident is the latest chapter of a years-long feud between two of the county-wide elected officials from opposing political parties. It has ranged from the county’s fiscal management, the coronavirus response, to even bed bugs in the county building.

Poloncarz and Erie County Legislative Chairwoman April Baskin, both democrats, wrote a letter to Mychajliw, a republican, on Tuesday asking Mychajliw where he was on the day of the U.S. Capitol riots due to his association with “close friend, Peter Harding”.

“You are also most likely already aware of the growing public perception that you were involved in the attack of the Capitol,” the letter said.

Mychajliw called Poloncarz an “absolute moron” for the allegations and showed camera footage from the Rath Building that showed Mychajliw walking around Rath Building on the day. The comptroller also said he took calls from his office phone of people asking if he was in Washington

“Mark Poloncarz is literally the world’s biggest moron,” Mychajliw told WBEN’s David Bellavia. “He sends me this letter saying ‘Why were you in Washington?’….It took him about 30 seconds to find footage of me without a mask in the Rath Building. Guess who’s in charge of security video? Mark Poloncarz. All he had to do was look at the video of January 6 and guess where I am? In the Rath Building. In Buffalo. Working.”

Mychajliw criticized Poloncarz and his administration for focusing on Mychajliw’s attendance on January 6 instead of the vaccine distribution locally.

When asked to comment on Mychajliw's response, Poloncarz spokesman Peter Anderson responded with the following message:

"That video was produced by WBEN’s own Financial Guys," the e-mail read. "Is that part of the story, along with how did they manage to get their hands on Rath building security footage? Wondering about that. Seems like a necessary and very relevant aspect. Will check with the County Executive to see if he has any response."

The Financial Guys are paid programming on WBEN.