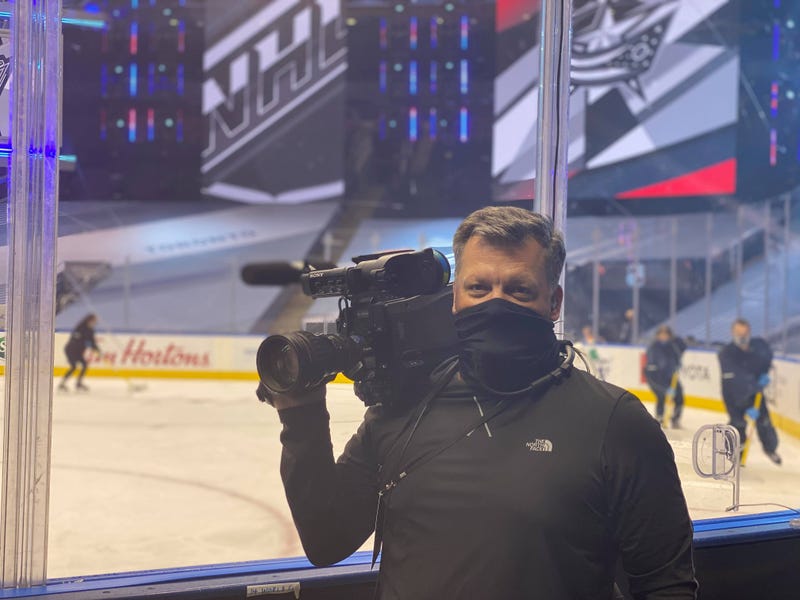 EDMONTON, Alta (WBEN) - A Western New York native is nearing the end of his time in the NHL's playoff bubble.

Eden native Matt Gould has spent the last two months in Canada working as a camera operator throughout the playoffs. During his tour in the hockey bubble in both Toronto and Edmonton, you may have seen him by the rink with his camera.

You certainly viewed his camera angles if you've watched the games.

Still, it's an entirely different atmosphere than he's used to. Because there's been no crowds, there's no organic excitement.

"We've grown accustomed to it, I think, and the players have grown accustomed to it, too," he said. "You hear the players talking to each other on the ice far more than you ever would with a crowd in place. You miss the energy of the crowd on a big hit. There's been a lot of physicality in these series and I can almost hear the crowd in my head. Even the piped in noise aside, you know when that crowd would lift and you'd want to include the crowd in your shot. So there's not any of that going on but you can still feel it."

While some may want to discredit this year's postseason, he said you shouldn't because it's just as competitive as past years.

Gould landed this role after working with NBC Sports for the last several years, including work in the past playoffs. He also runs the camera for visiting teams at KeyBank Center and used to direct Sabres broadcasts.

"I know a lot of people around the league and, thankfully, I've had a pretty good relationship with NBC over the years," he said. "I got a phone call asking me if I'd be interested in making a bit of a commitment."

As a full-time freelancer, Gould wasn't able to work early in the pandemic when most sports leagues halted due to various government orders.

"Having some work after several months off was a good thing," he said.

Still, even though work has been steady, he knew the commitment was a difficult one because he would not be able to see his family for several weeks.

"Now that we're into the Stanley Cup Finals and we have a calendar in place with a potential date I might be home, it breathes a little more life into you," he said. "It's been a great experience out here. I have three kids, one of which happens to be a senior in high school this year, and my wife is a teacher in the Hamburg district, that I miss tremendously and stay in touch with every day but it's just not quite the same."

While this year's playoffs was previously criticized for its unorthodox format, the NHL was praised for its creation of a hockey bubble that kept teams from interacting with the public and, therefore, halting any spread of coronavirus. Gould said it's been remarkable that there have been no positive tests.

His days were pretty straightforward. He works either in the hotel attached to the arena, inside the arena, or in an outside space. When the early rounds of the playoffs took place in Toronto, he'd often work three games consecutively. The workload lightened once he got to Edmonton.

"I'm a handheld operator down at ice level on the glass," he said. "So I have a camera on my shoulder. Some of those triple-headers were a little taxing on the body. It's calmed down now. We've had games every day through the conference finals and now it's every other day with one back-to-back worked in in the cup final."

There are some things that are easier under the current format. He said the equipment is already set up each day, so they don't have to break down equipment when leaving the arena for a day. Gould also doesn't have to worry about any fans heckling him because he's in their line of sight.

"I can feel when the puck rings around the boards, I can feel the vibration of the puck on the boards and hear where it's going," he said. "I might not normally when there's a full crowd there. It's a very different experience and actually does help us better because we can anticipate a few things."

In spare time, there's golf simulators and workers in the hockey bubble also play cards to pass the time.

"I think I'm just looking forward to sleeping in my own bed," he said. "Hotels are hotels. The pillows here are not the best."

Gould said he's not expecting any issues when it comes to traveling back to Eden because he's been tested every day. However, once hockey season ends, he'll start up his next gig working games for the NFL.

"The NFL requires (a quarantine) for anybody traveling out of country," he said. "It'll be a balance for me for a couple of weeks. But I think I'm used to not going too many places."

Game three of the Stanley Cup Finals between the Dallas Stars and Tampa Bay Lightning is Wednesday at 8 p.m. The series is tied 1-1.