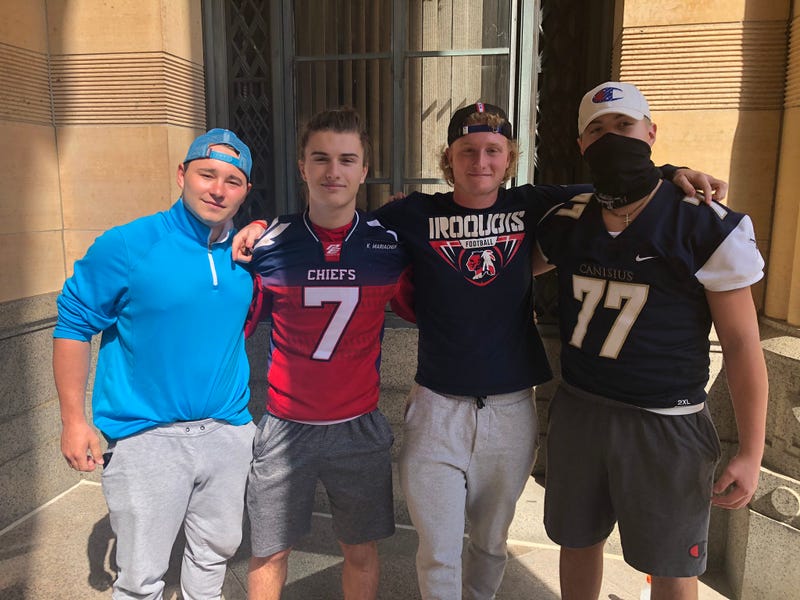 BUFFALO, N.Y. (WBEN) – Parents and student-athletes are pleading for New York State to allow all fall sports to begin on Monday.

“We think they made a mistake,” John Mariacher, whose son, Kendall, is a football player at Iroquois High School, said. “There’s already close to 40 states in the country playing high school football with almost 2,000 games already played with no issues. Many of those states have a higher COVID rate, way higher than New York. We don’t understand why they’re not playing here.”

Mariacher said kids are still getting together in their free time, which only further devalues the argument that public safety is a concern.
He said he’d be open to many different protocols such as mask wearing and spreading out fans at a stadium.

“They’re out there living their lives now,” he said. “So let them play football.”

Earlier this month, the New York State Public High School Athletic Association announced that football, volleyball, and competitive cheerleading seasons will all begin their season on March 1 because they are deemed “high-risk fall sports”.

Athletes like Kendall, who normally runs track every spring, may now have to choose between which sport to play in the fall.

Kendall said he’d be happy to play in the spring but is worried the state will suddenly change their mind again come February. As a potential college athlete, he worries about what it will mean for his prospective college.

Low and moderate risk fall sports such as cross country and soccer can begin practices on Monday.

“We’ve spent two days speaking with nearly 500 athletic directors across the state and it’s clear that administering high-risk fall sports during the COVID-19 pandemic presents a significant challenge for our member schools,” Dr. Robert Zayas, NYSPHSAA Executive Director, said in a statement.
“These are unprecedented times and unfortunately, difficult decisions will have to be made to address this ongoing crisis. We continue to stay committed to providing support to our member schools and quality participation experiences for the students we serve.”

“At a time when all BPS students are learning remotely, the safety of our students and staff is always our highest priority.”