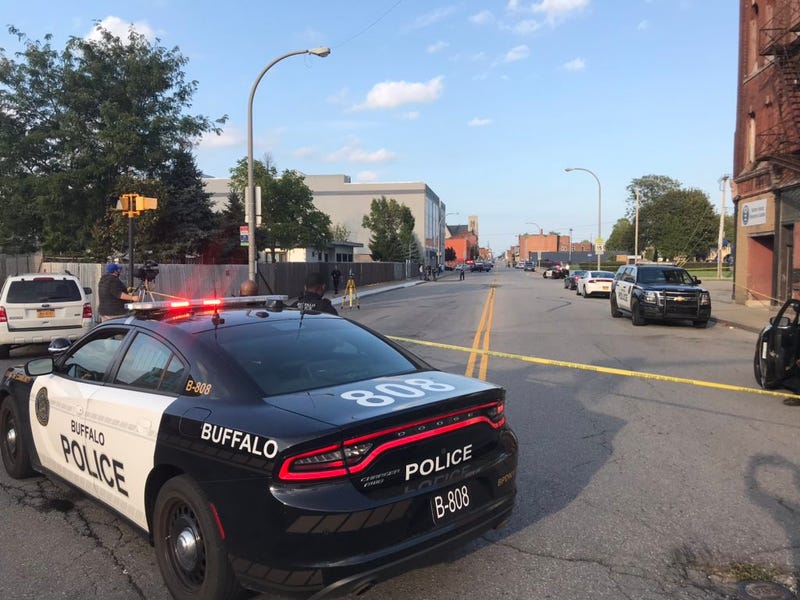 BUFFALO, N.Y. (WBEN/AP) — Buffalo police say man wielding a baseball bat was shot and critically wounded after striking an officer in the arm.
Police Capt. Jeff Rinaldo said police were responding to a mental health call just before 3 p.m. Saturday at Genesee and Ellicott Streets when they encountered the man holding the bat and acting erratically.

Police followed the man for several blocks, attempting to get the bat away from him, using pepper spray on more than one occassion, Rinaldo said.

While responding to a mental health call in #Buffalo, a suspect became agitated and was threatening @BPDAlerts with a bat. Officers fired two rounds, one striking the suspect in the abdomen. Suspect in critical but stable condition. pic.twitter.com/SFevwsrp5L

“They attempted to speak with the individual who became very agitated," said Rinaldo at a briefing outside Buffalo Police Headquarters Saturday. The man swung and struck one of the officers according to Rinaldo.

“When he attempted to swing the bat a second time at her, that’s when her partner did fire two rounds, striking the suspect one time in the abdomen”

The suspect was taken to Erie County Medical Center, where he was initially listed Saturday evening in critical but stable condition, police said. Sunday afternoon the 60-year old man's condition was upgraded to stable condition.

Rinaldo said one of the officers that responded was a crisis intervention officer. He declined to say whether the use of force was appropriate.

“Part of our investigation will be to determine what brought the officers there; how they handled it; attempts at de-escalation and what led to the eventual shooting of the suspect," he said. “So, it's too early for me to make a call one way or another.”
He said said police body camera footage is being reviewed as part of the investigation into the shooting.

The incident is being investigated by Buffalo Police internal affairs and homicide officers and the Erie County District Attorney's office has been alerted as a part of standard protocol in an officer-involved incident.

“As the investigation continues into the details of today’s incident on Genesee Street, we believe our officers followed Departmental protocols and New York law in responding to an individual who attacked a Buffalo police officer with a baseball bat.  The officer was struck repeatedly and was taken to Erie County Medical Center for treatment.

“Officers on the scene, including a member from the Crisis Intervention Team (CIT), pleaded with the individual to drop the bat. Despite these efforts the individual ultimately attacked the officer who was injured.

“The Buffalo Police Benevolent Association has been actively communicating with City officials, members of the Common Council and police administrators to improve police interactions with people with mental health issues.

“This type of interaction is extremely dangerous and can quickly turn into a life or death situation.  Due to these concerns, the PBA is advocating a collaborative process to enhance training and refine protocols to properly address this public health and safety issue.”