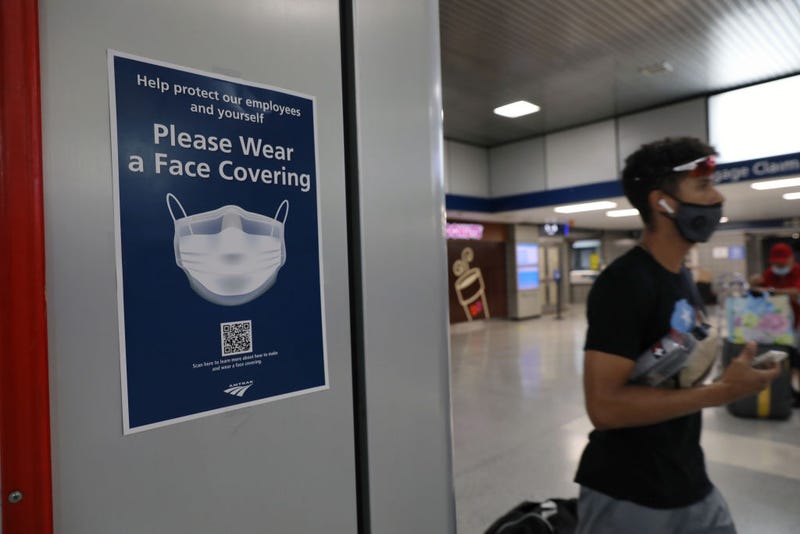 ALBANY, N.Y. (WBEN/AP) — New York may have to consider changes to its quarantine rules for out-of-state travelers now that two of its closest neighbors, Connecticut and New Jersey, are on the brink of getting added to the list of places subject to the restrictions.

The three states announced earlier this year that they would jointly require people traveling from states with higher rates of transmission to isolate themselves for 14 days after their arrival.

About three dozen states are now on New York's must-quarantine list. Both Connecticut and New Jersey were poised to join them based on the current threshold of targeting states averaging 10 or more new cases per day, per 100,000 residents.

“It’s a problem," Cuomo said at a news conference Monday.

The test positivity rate in the “Red Zone” focus areas is 3.31%.

We continue to take strong action to respond to these outbreaks and to stop the spread.

He said there are so many connections between the three states, and so much cross-border commuting to work or shop, that travel restrictions might be unenforceable.

“I don’t know to what extent it would be possible to do border patrol because you don’t have airports there et cetera, and it would also seriously be disruptive to the economy,” Cuomo said. "So, it’s complicated and we’re working with them, but we don’t have any final conclusion yet but for a practical matters, you can’t do border control with New Jersey and Connecticut.”

Infections are also on the rise in Pennsylvania, including in northern communities bordering New York’s Southern Tier. New York is opening rapid testing sites in the region, where infections and hospitalizations have seen an uptick.

“My advice is not to travel, frankly,” the Democrat said.

For the week ending Oct. 17 there were 337 new cases for a weekly positivity rate of 1.2% (both lower than prior week). pic.twitter.com/TN1d2F4AO4

Cuomo said his administration is working with local officials on possible adjustments to his order designating parts of New York City and suburban communities as hot spots where schools and nonessential businesses are closed.

The latest data suggests that efforts to rein in COVID-19 outbreaks in so-called “red zones” are working, Cuomo said.

By Wednesday the state may be able to adjust both the list of places subject to the restrictions and which metrics hot spots would have to hit to reopen.

“As discrete areas get better, you can rewrite the size of the zones,” Cuomo said.

Red zones accounted for one in 10 of the state's new coronavirus cases Sunday, down from about one in 5 in late September.

Still, there are signs of elevated infection in parts of Brooklyn, Rockland County and Orange County, officials said.

Over the weekend, health officials issued an order barring a public gathering outside a wedding scheduled to happen in Brooklyn Monday, claiming it could have become a super-spreader event drawing thousands of people. It falls under an ordinance carrying a potential fine of $10,000.

The synagogue hosting the wedding for an influential rabbi's son in the Williamsburg section of Brooklyn, Congregation Yetev Lev D’Satmar, said in a statement that it had only planned a brief public reception with social distancing protocols in place.

The statement said a smaller family-only wedding will go forward, but added, “It’s sad that nobody verified our plans before attacking us.”

Members of the public who would have wanted to intend in person were encouraged to listen in instead on the synagogue's phone conference system.

Mayor Bill de Blasio said in a briefing Monday it was “very helpful” that wedding organizers opted for a smaller service. He said everyone in the city’s restricted red and orange zones — which do not include that part of Brooklyn — needs to “continue to dig deeper” with social distancing, mask wearing and other practices.

“We can get out of this in just a few weeks if everyone does what they need to do. We want those restrictions off, to say the least … but we’ve got to bring the numbers down,” the Democrat said.