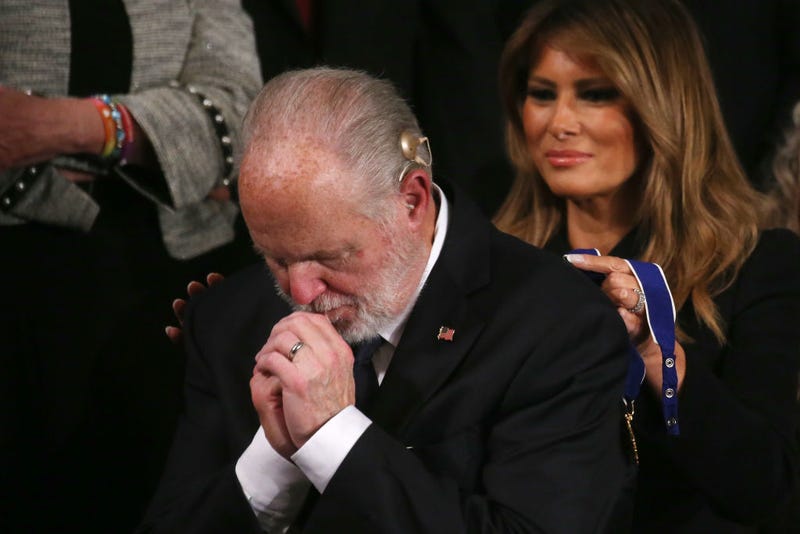 Radio personality Rush Limbaugh reacts as First Lady Melania Trump prepares to give him the Presidential Medal of Freedom during the State of the Union address in the chamber of the U.S. House of Representatives on February 04, 2020 in Washington, DC. Photo credit Mario Tama/Getty Images

Radio host Rush Limbaugh, who has been diagnosed with Stage 4 lung cancer, said on Monday he's suffered a setback.

"The scans did show some progression of cancer," he told listeners of his radio show.

He added, "It's not dramatic, but it is the wrong direction."

Limbaugh, 69, said his medication had been changed recently in "hopes of keeping additional progression at bay for as long as possible."

Thank you so much for your overwhelming encouragement, support, and prayers out there. They absolutely work! Fear not, I plan to hang around a long time to continue to annoy the left.

He added, "It's tough to realize that the days where I do not think I'm under a death sentence are over. Now, we all are, is the point. We all know that we're going to die at some point, but when you have a terminal disease diagnosis that has a time frame to it, then that puts a different psychological and even physical awareness to it."

Limbaugh announced in February that he was diagnosed with lung cancer and he had missed several shows to undergo treatment.