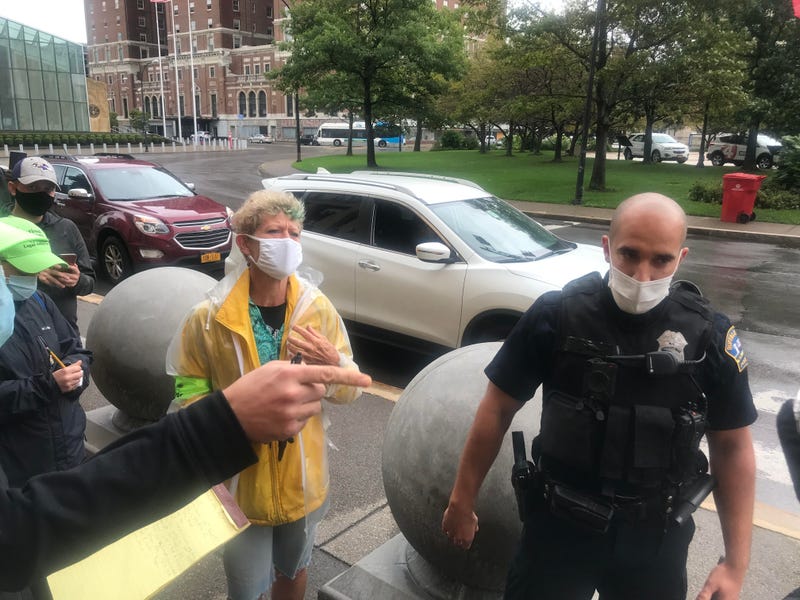 BUFFALO (WBEN) - A new policy within the Buffalo Police Department was revealed Wednesday, sort of out of the blue, by Mayor Byron Brown, stemming from a question about some officer's again covering up name tags.

"The policy of the police department has been changed for police officers to wear a badge on their uniform with a badge number as opposed to a name," Brown responded.

As there have been several stories regarding officers in recent weeks covering up their name tags, much to the chagrin of many residents, the announcement came as a surprise, especially since it was instituted last Friday.

Buffalo Police Captain Jeff Rinaldo explained why the change was made.

"This is in response to more than a dozen officers that have been doxxed - the process of where individuals place personal identifying information about the officers and their families out in social media and other forums and then threaten the safety of the officers, their children or their families," said Rinaldo.

PBA President John Evans said they drew inspiration for their policy change request from other agencies around the country.

"It's more so for their families and their safety," said Evans. "We know inherently the job is dangerous, and that's fine for us individually, but as far as our wives, spouses, children, they should not be subjected to any more danger than anybody else."

Brown said officers should still have some sort of identification on their person, but implored people who are releasing officers' personal information to stop.

"This will cut down on the doxxing that is occurring with police officers," said Brown. "That is an unacceptable practice; it should not be happening. As far as I'm concerned, I see it as an illegal practice."

Evans acknowledged this policy shift won't completely halt all doxxing, but he's thankful to the administration for enacting the change because it simply makes it more difficult for personal information to be revealed.

"It will just be a step where if there is an individual with a sinister plan or what have you, a step they'd have to take to look it up...whatever they're going to have to do in order to gain that identity," he said.

sports
Legendary story about Akiem Hicks drinking 40 beers resurfaces on 'Monday Night Football'
music
This Whitney Houston classic is the latest to hit 1 billion views on YouTube
music
Ally Brooke on her new book and the parts of Fifth Harmony that made her 'uncomfortable'
music
RADIO.COM's Friday Night Takeover with Jon Pardi
news
Taco Bell announces the return of fan favorite Cheddar Chalupa
music
Maren Morris reveals why she voted for Biden and why she says it's time to 'fire' Trump