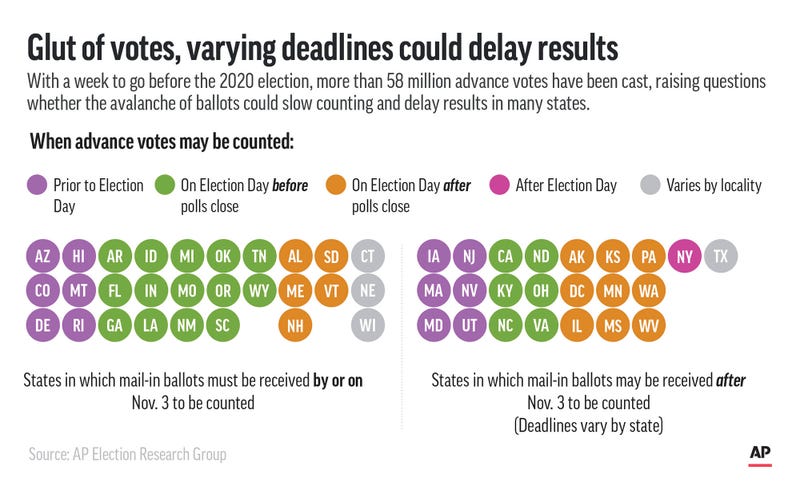 HOW WILL VARIOUS BALLOTS BE COUNTED, AND WHAT RESULTS WILL BE KNOWN ON ELECTION NIGHT?

Millions of Americans have already voted, but each state has different rules on when it's allowed to actually start counting those ballots. That is going to produce results coming in at very different times — perhaps days or even weeks after Election Day.

In some places, election officials can begin processing ballots weeks before Election Day. That means workers can start verifying voter information while also removing ballots from their envelopes to physically get them ready for tabulation. Doing so readies ballots for counting on Election Day and will speed up the release of results.

But it's not that simple.

In some of the most critical battleground states, laws prevent the early processing of ballots. So on Nov. 3, Election Day, officials will have to run an in-person election while also working through the unprecedented number of mail-in votes. This dynamic is likely to delay results and heighten the potential for big shifts if in-person vote tallies are upended by the counting of mail-in ballots.

President Donald Trump has repeatedly warned of voting fraud without offering any evidence. Because of that, there are concerns that he will use delays in vote-counting to declare results illegitimate. While results might come in later than usual this year, that's because of a change in how people are voting, not malfeasance or fraud.

Here is another wrinkle: Nationwide delivery delays at the U.S. Postal Service are sparking fears that ballots might not arrive in time to be counted. Republicans, including Trump's campaign, have been filing lawsuits to stop election officials from counting ballots that are delivered after Election Day.

For example: As of right now in Pennsylvania, votes that arrive by mail three days after Nov. 3 will be counted, after an intense legal battle that went all the way to the U.S. Supreme Court last week. Republicans have filed another suit against the extension. Also, Pennsylvania doesn’t allow early processing of mail-in ballots, further complicating matters.

In Michigan, another hotly contested state, an appeals court has struck down a 14-day ballot-counting extension, leading the state's top election official to urge voters to drop off their ballots in person rather than use the Postal Service. Courts have also nixed similar extensions in Wisconsin and Indiana.

This story is part of a series dedicated to answering commonly asked questions from AP's audience about the 2020 U.S. presidential election.