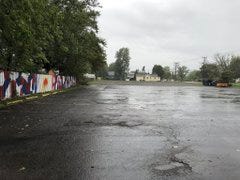 ORCHARD PARK, N.Y. (WBEN) – There was a bizarre sight outside Bills Stadium just hours before the Buffalo Bills home opener on Sunday.

No, it wasn’t a fan dressed as Elvis. It wasn’t somebody with their body painted blue and red.

Those are considered normal. What’s bizarre is there was none of that.

Because of New York State’s restrictions caused by the coronavirus pandemic, professional sports can happen, though no fans can go to any games. As a result, fans are unable to tailgate ahead of the Bills home opener.

“It’s basically just family and friends,” Shane Prouty, who operates a private lot near the stadium, said. “We’re trying to have fun with it and try and kind of get some normalcy out of it. But you have to follow the rules that have been put in place.”

Notable tailgate lots are empty three hours before kickoff for the HOME OPENER.

It’s bizarre to see in person. Shane Prouty has a few people over at his home next to the stadium. The lot next to Danny’s is completely empty. Hammer’s Lot and all county lots are closed. pic.twitter.com/NDKYcv7kD4

The parking lot at Danny’s Restaurant at the corner of 20A and Abbott Road is usually filled to capacity well before 10 a.m. When we arrived at the site, you’d think it was just another weekday.

“Normally, we have a full bar and in the back we have a brunch,” fellow co-owner Ashley Ebeling said. “It’s just a packed restaurant.
It’s really hurt us financially.”

No one can give a definitive answer if they expect fans to return to Bills Stadium this fall. The earliest it could be is on October 15, though that decision will ultimately be made by the state government.