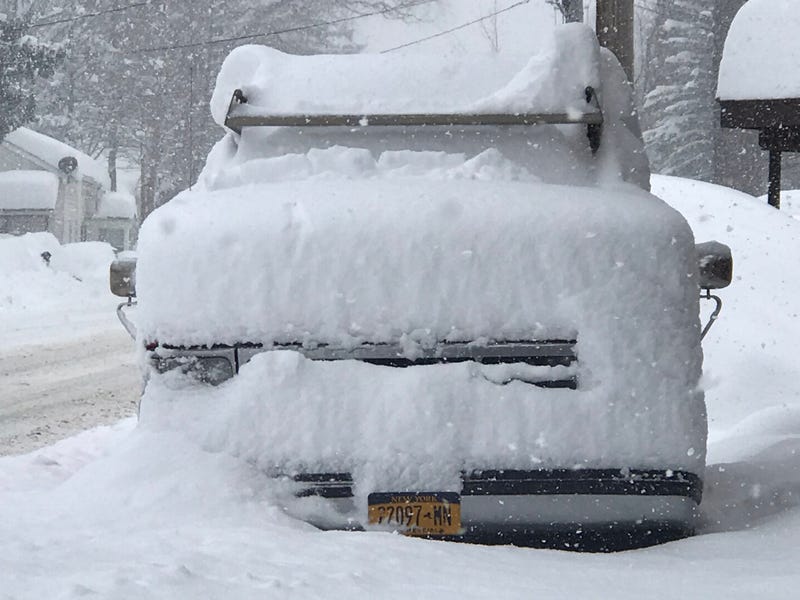 A pickup truck buried in lake effect snow along Route 240 in West Falls, N.Y. Saturday, February 20, 2021 as a lake effect snow band dropped in excess of 30 inches of snow on the community. Photo credit WBEN Photo

West Falls won the lake effect snow derby with a measurement of 30 inches recorded by a National Weather Service spotter. Throughout the day in West Falls, shovels, plows, snowblowers and ATV's were seen working to dig-out driveways and homes along Route 240, with driveways looking more like tunnels as the snow piled high.

Just south of West Falls in Glenwood, Kissing Bridge recorded 26 inches of snow Saturday midday and the snow kept coming all day long to the delight of ski and snowboard enthusiasts.

With the snow being measured by the foot along the narrow swath across the Boston hills, in the more populated Buffalo metro area about an inch of accumulation was measured in most spots.

The lake effect band settled southward and dissipated late Saturday and a calm and uneventful weather day will unfold Sunday as winter sports enthusiasts enjoy the impressive snow pack and property owners continue their dig out.