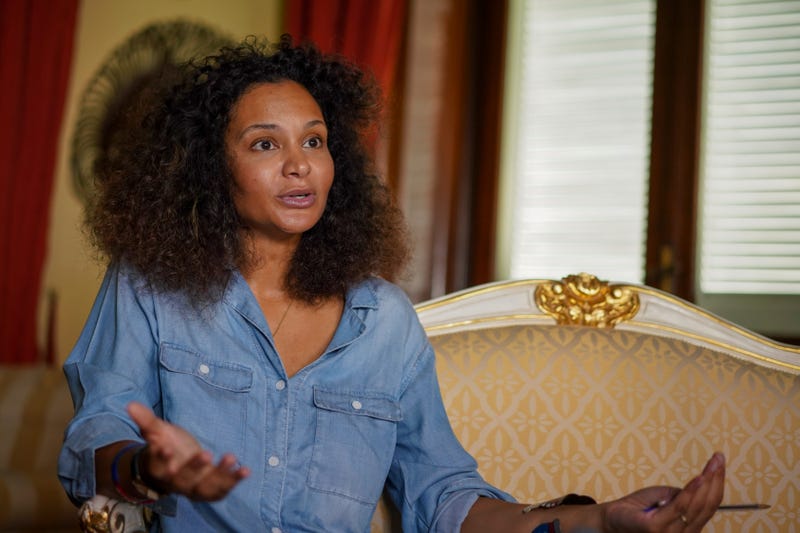 Photo credit Fashion designer Stella Jean talks during an interview with the Associated Press, in Rome, Thursday, Aug. 13, 2020. Stella Jean, a Haitian-Italian designer born and raised in Rome, launched her appeal this summer. She asked the Italian National Fashion Chamber and the global powerhouses steering it, including Prada, Ferragamo and Zegna, to back their social media pledges supporting the Black Lives Matter movement with concrete, transparent commitments toward greater racial diversity. (AP Photo/Andrew Medichini)
By The Associated Press

MILAN (AP) — The only Black designer belonging to Italy’s influential fashion council is demanding a "long overdue cultural reform’’ from her colleagues under the slogan: Do Black Lives Matter in Italy?

The conversation has gotten off to a rocky start.

Stella Jean, a Haitian-Italian designer born and raised in Rome, launched her appeal this summer. She asked the Italian National Fashion Chamber and the global powerhouses steering it, including Prada, Ferragamo and Zegna, to back their social media pledges supporting the Black Lives Matter movement with concrete, transparent commitments toward greater racial diversity.

In response, Jean received a letter from the council president saying that addressing racial disparity within Italian fashion was not within the body's area of responsibility, despite the fact that members had backed a diversity manifesto in December. According to the letter, such initiatives "pertain instead to parliament, the government or any other bodies.’’

Exasperated, Jean has decided not to preview a runway collection at Milan Fashion Week until “they demonstrate awareness of the problem.”

‘’When you talk with them, they have no bad intentions, I know them. But they say something like 'What are you talking about, Stella? We have never heard about racism in Italy. It is not an Italian story, it is about the U.S., the U.K., other countries. Not Italy,'’’ Jean told The Associated Press. “My response is: ‘Why do you see all these people filling squares from the north to the south of this country for Black Lives Matter, this entire generation of invisible new Italians?’”

Soccer, another important Italian cultural institution, recognized that Italy has a problem with racism and worked to eliminate it.

Racially charged gaffes by Italian fashion houses have been well-documented, from Gucci’s Blackface sweater to Prada’s Little Black Sambo bag charm to Dolce&Gabbana videos that were seen by many as mocking Asians. This summer, Marni, another major fashion house, apologized after being called out for its images of a Black man with chains around his ankles.

Jean and the co-author of her appeal, Milan-based U.S. designer Edward Buchanan, said in interviews that the issue is deeper than just culturally insensitive designs. But they say those gaffes highlight the lack of diversity in Italian fashion houses and the "pervasive racism and prejudice’’ in the industry despite ‘’significant funds allocated to provide sensitive training.’’

"These ‘mistakes’ can be better recognized, labeled and addressed as ‘decisions,’” Jean asserts.

Their push is to open doors to Black Italians who would like to work in fashion but don’t see themselves represented and don’t see a way in. They also are demanding data on Black personnel employed in decision-making roles in fashion houses — not models or marketing staff who they say “are sadly more often than not displayed for show.’’

‘’We want to send a resume to a headhunter and not have it shut down because you are a Black designer,’’ Buchanan said.

In their appeal, they spoke for dozens more whose names did not appear but include Italian and Italy-based Black creators like Michelle Ngonmo, who launched an AFRO Fashion Week Milano on her own after failing to get the backing of the fashion industry, and Louis Pisano, a writer and influencer who has worked in Italian fashion for a decade. Pisano cites incidents like having his fashion show invitations scrutinized while white influencers are waved into events.

Many more "are hesitant to speak out for fear of a professional lynching,’’ Jean said.

A frequent refrain from Black creatives in Italian fashion is that they are often the only person of color in the workplace. They also see their opportunities and access limited by their skin color.

Buchanan, the designer of his own luxury knitwear label, Sansovino 6, started out in Italy more than 25 years ago launching ready-to-wear at Bottega Veneta, and has worked with Calvin Klein and Donna Karan. Now when he is called for consulting jobs, it is exclusively for streetwear or urban brands, despite his luxury credentials. Meanwhile, white colleagues with similar resumes now hold creative director positions at major brands.

‘’I am absolutely happy with the scale of my career. But I can say honestly that opportunity has not come to me because of the color of my skin,’’ Buchanan said.

Stella chafes at the Africa Hub, which promoted five brands during Milan Fashion Week in February. She says it gave a market space but no runway visibility to brands including Ghana-based Studio 189, co-founded by Rosario Dawson and Abrima Erwiah, which has previously shown at New York Fashion Week.

"Why do we need a special area like you are visiting a safari?’’ Jean asked.

The president of Italy's fashion council, Carlo Capasa, defended the Africa Hub, saying it was set up alongside a section to support China, which was mostly missing from Milan Fashion Week due to the coronavirus pandemic, and some young Italian brands. The only Black designer to present a runway show at Milan that round, which Jean skipped, was the British brand A-COLD-WALL.

Capasa told AP that the council would produce data on diversity inside fashion houses, and that a progress report on the diversity manifesto would be made in December. He said the global Black Lives Matter protests had created a sense of urgency behind diversity pledges but added that “making deep cultural changes requires time,’’ citing the need for multi-year programs "to include all minorities.’’

"What happens inside a fashion house mirrors the social construction of the country. Italy is different from the United States," Capasa said. "In every country, inclusion and diversity assumes a slightly different meaning.’’

Jean emphasized that she is trying to prompt change from within as the only Black designer to belong to the council since its formation in 1958. Her eponymous brand, rooted in multiculturalism, has grown steadily since her Milan runway debut seven years ago.

While she won't show in September, she has asked Capasa to host a Black Lives Matter event to kick off "the immediate launch of a long-overdue fashion cultural reform.''

Follow all AP coverage of racial injustice at https://apnews.com/Racialinjustice.