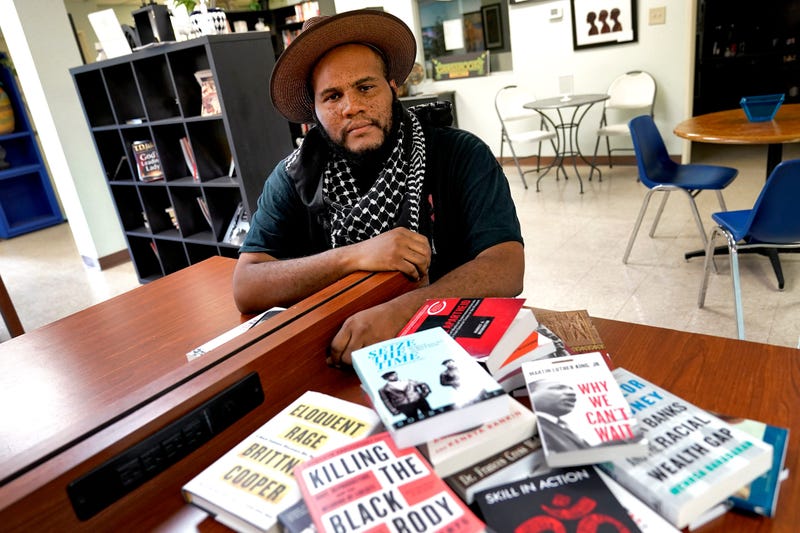 Photo credit Owner Ali Nervis displays books on race relations at his bookstore Friday, Aug. 21, 2020 in Phoenix. Black-owned bookstores across the U.S. have seen increased sales following the police killings of Breonna Taylor and George Floyd, and store owners are now asking people who have read about Black history and culture to take action against the systems that have enabled racism. (AP Photo/Matt York)
By The Associated Press

PHOENIX (AP) — A renewed focus on social justice in the wake of police killings of Breonna Taylor and George Floyd has seen sales soar at Black-owned bookstores around the country as customers seek out knowledge from their own communities.

The stores have always served as a community space for Black people to gather and educate themselves and their communities about their culture and history.

Sales increased exponentially after calls on social media in June encouraged people to spend their money at Black-owned businesses amid national tension.

Ali Nervis, the owner of Grassrootz Books and Juice Bar, Phoenix’s only Black-owned bookstore, said in two days his store received 200 orders for books on race relations, more than all they had received since opening in September 2019.

“People have this sense to be educated on what is happening in the country and what led up to this point,” Nervis said of protests and community tension in Phoenix. “We carry a lot of books about social commentary, history and books written by Black authors. I think that is part of the reason why we’ve seen a dramatic increase in our book sales.”

Nervis has since caught up with an increase in sales and has taken time to reflect on what is happening in society, like other Black leaders in the industry.

“It’s wonderful that Black people are wanting to support Black people — it’s not new, but support has expanded, interest has increased and more people have taken it on,” said Paul Coates, owner of Black Classic Press, a Black-owned publishing and printing company based in Baltimore.

“I’ve seen increases in demand before. There was a bump during the Civil Rights Movement and during the Black Power Movement. People were searching for information. There was interest around the time Roots came out too.”

“Roots," written by Pulitzer Prize-winning author Alex Haley, became a wildly popular nine-hour miniseries that gripped the country in 1977. Haley based the epic tale on his own family history from his ancestors' enslavement though several generations to their liberation.

Black Classic Press has operated as a publisher for 42 years and a book seller for eight years, Coates said, adding that he has seen books help power movements for decades.

Donya Craddock, co-owner of The Dock Bookshop in Fort Worth, Texas, said she could attest to the correlation.

She has always seen parallels with what is going on in the community and in the bookstore because it energizes people. "People want to share their emotions, people are hurt, and everybody don’t want to go to a bar believe it or not,” she said.

Craddock opened The Dock Bookshop with her sister, Donna, in 2008. The store serves to educate people about Black history and culture through books, in-person events and other programs. It is one of the largest Black-owned bookstores in the Southwest.

The owners not only want to educate their communities, but also encourage people to use what they learn to take action against systemic racism.

The owners of Turning Page Bookshop have said Goose Creek, South Carolina, does not have a large African American community, but they provide and serve surrounding communities, such as Charleston and Summerville since opening in June 2019.

“From June 2 until about July 25 we received from 75 to 150 orders a day," said VaLinda Miller, who runs the store with her best friend Arrylee Satterfield.

She said some of the biggest sellers included “White Fragility,” “Me and White Supremacy,” and “How to Be an Antiracist."

Miller said she didn’t want people to just buy the books because they were popular, but to help them understand how the system has made them the way they are. "I don’t want you to stop learning after reading the book. I want you to take that book and go out and look for something else to listen to and learn from.”

There has to be some action that follows the education, Nervis said, adding that he is not optimistic interest will last much longer. “That’s why we continue to do what we do and ask for the support. Not just our bookstore, but everyone doing work in Black communities.”