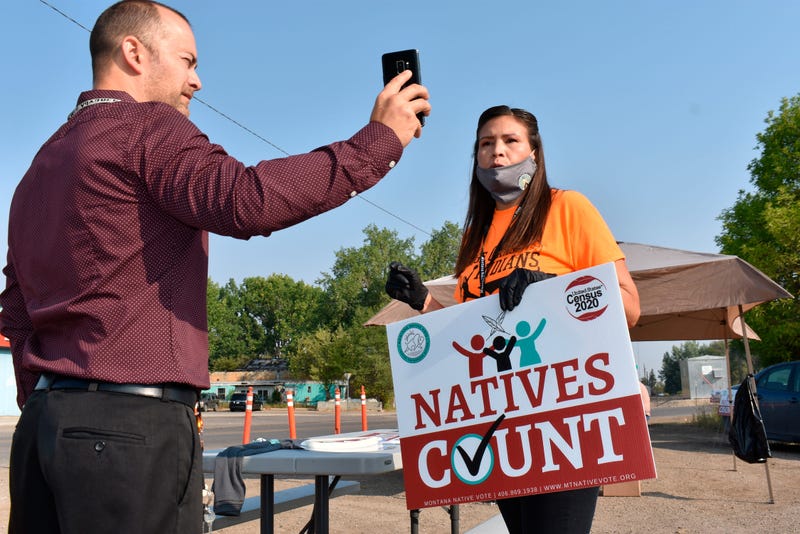 Photo credit Activist Lauri Dawn Kindness, right, speaks at the Crow Indian Reservation, in Lodge Grass, Mont. on Wednesday, Aug. 26, 2020, as Lodge Grass Mayor Quincy Dabney records her for a social media campaign to increase Native American participation in the U.S. census. Kindness and other activists with Western Native Voice are trying to prevent an undercount of the tribe that could result in less federal funding. (AP Photo/Matthew Brown)
By The Associated Press

As a federal judge considers whether the Trump administration violated her order for the 2020 census to continue through October by setting an Oct. 5 end date, her court has been flooded with messages from census takers who say they are being asked to cut corners and finish their work early.

Josh Harkin, a census taker in northern California, said in an email Tuesday to the court that he had been instructed to finish up by Wednesday, even though his region in the Santa Rosa area still had 17,000 homes to count.

“Please do something to help us! We really need to go until the end of October to have a chance at a reasonable count for our communities," Harkin wrote.

Paul Costa, a census taker in California currently working in Las Vegas, said in an email to U.S. District Judge Lucy Koh on Tuesday that census takers were being pressured to close cases quickly, “if not at all accurately."

“Many states, including Nevada has not been properly counted yet. Especially the Southeastern states ravaged by the recent hurricanes. We want to be able to do our jobs correctly & as accurately as possible," Costa wrote.

A San Francisco census taker, whose name was redacted in the email, was instructed to turn in census equipment on Wednesday since field operations were ending. The census taker asked the judge to order the Census Bureau to stop laying off census takers, also called enumerators, so that the head count will continue through October as the judge had ordered.

Another census taker, who only was identified as “Mr. Nettle," reached out to plaintiffs' attorneys and told them that census takers were being pressured “to check off as many households as complete, seemingly to boost numbers everywhere above 99%, while sacrificing accuracy and completeness," according to a court filing.

Last week, Koh issued a preliminary injunction stopping the census from ending Wednesday and clearing the way for it to continue through Oct. 31. The judge in San Jose, California, sided with with civil rights groups and local governments that had sued the Census Bureau and the Department of Commerce, which oversees the statistical agency, arguing that minorities and others in hard-to-count communities would be missed if the counting ended at the end of September instead of the end of October.

Koh is holding a hearing on Friday to determine whether the Trump administration violated her order by putting out a statement that Oct. 5 was a target date for ending the census or whether it should be held in contempt.

While the court has the authority to find the Trump administration in contempt, attorneys for the civil rights groups and local governments said in a motion Thursday that they weren't seeking a contempt finding at this time. Instead, they said they wanted full compliance with the judge's order, arguing the Trump administration had violated it “several times over."

To achieve that, they asked Koh to require the Census Bureau to file weekly compliance reports, ensure that all field workers know about the injunction and require any cases to be reopened if they were closed because of a push to finish the count by either Sept. 30 or Oct. 5.

The census is used to determine how many congressional seats each state gets and the distribution of $1.5 trillion in federal funds annually.

James Christy, the Census Bureau's assistant director for field operations, said in a declaration to the court on Tuesday that he had sent in an email to all managers involved with field operations that they must comply with Koh's injunction.

“To be clear, no occupied housing units will go ‘uncounted,'" Christy said.