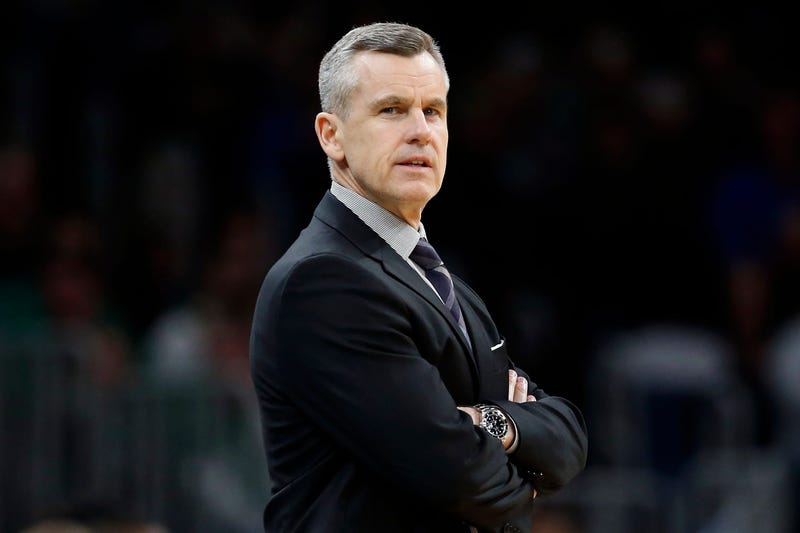 Photo credit FILE - In this March 8, 2020, file photo, Oklahoma City Thunder coach Billy Donovan watches during the second half of the team's NBA basketball game against the Boston Celtics in Boston. The Chicago Bulls hired Donovan as coach Tuesday, Sept. 22. The 55-year-old Donovan spent the last five seasons with the Thunder. He replaces Jim Boylen, who was fired after the Bulls finished 22-43 and were one of the eight teams that didn’t qualify for the NBA’s restart at Walt Disney World. (AP Photo/Michael Dwyer, File)
By The Associated Press

CHICAGO (AP) — The Chicago Bulls hired Billy Donovan as their coach Tuesday, landing one of the top candidates on the market to lead a rebuilding team with an overhauled front office.

The 55-year-old Donovan spent the past five seasons with the Oklahoma City Thunder. He replaces Jim Boylen, who was fired after the Bulls finished 22-43 and were one of the eight teams that didn’t qualify for the NBA’s restart at Walt Disney World.

“I’m excited to partner with Arturas as we work together on behalf of this historic franchise,” he said.

The Bulls came into the season with their sights set on a playoff spot. They were 11th in the Eastern Conference when play was stopped in March and decided they needed new leadership.

Donovan went 243-157 as coach of the Thunder and reached the playoffs each year. He was a finalist for Coach of the Year this season after his team outperformed expectations and pushed the Houston Rockets to seven games in the first round of the playoffs. But with his contract expiring, the Thunder announced two weeks ago he would not return, saying it was a mutual decision.

Before his time with the Thunder, Donovan coached for 19 seasons at the University of Florida, winning two NCAA titles.

“We are very pleased to welcome Billy and his family to the Chicago Bulls,” Karnisovas said. "The success that he has sustained over the course of his coaching career puts him on a different level. We feel his ability to help his players reach their potential, both individually and collectively, will mesh well with our roster. Whether as a player or as a coach, he has won everywhere his career has taken him, and we hope that will continue here in Chicago.”

Donovan inherited All-Stars Kevin Durant and Russell Westbrook when he was hired before the 2015-16 season. Oklahoma City reached the Western Conference Finals, squandering a 3-1 lead against Golden State.

Durant joined the Warriors after that season, shaking the Thunder and their fans. But Oklahoma City remained competitive.

Westbrook averaged triple-doubles the next three seasons and was MVP in 2017. The Thunder traded for Paul George and Carmelo Anthony prior to the 2017-18 season in an effort to challenge Golden State. But they've lost in the first round four straight times since that run to the conference finals.

They came into this season with lower expectations after trading Westbrook to Houston for Chris Paul and sending George to the Los Angeles Clippers for Shai Gilgeous-Alexander and Danilo Gallinari. But they went 44-28 and pushed the Rockets to the brink in the playoffs.

The Bulls are counting on Donovan to give them a lift after the team missed the postseason for the fourth time in five years.

On the court, the Bulls are led by Zach LaVine, who averaged 25.5 points this season, and Lauri Markkanen, who took a step back. The 7-footer from Finland missed 15 games with a pelvic injury and his scoring and rebounding numbers dropped.

Chicago hosted the All-Star game but didn’t have a player selected. That hammered home just how far the Bulls have fallen.