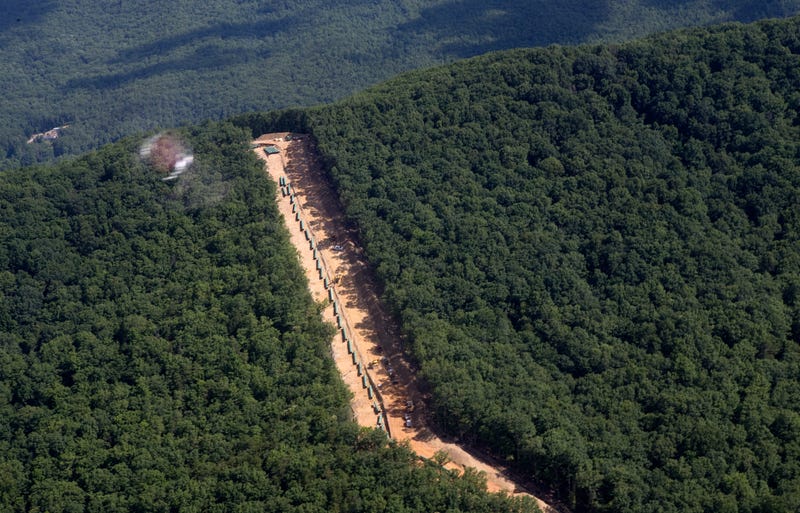 Photo credit FILE - This July 18, 2018, file photo, shows the Mountain Valley Pipeline route on Brush Mountain in Virginia. The Trump administration is seeking to fast track environmental reviews of the pipeline and dozens of other energy, highway and other infrastructure projects across the U.S. (Heather Rousseau/The Roanoke Times via AP, File)
By The Associated Press

BILLINGS, Mont. (AP) — The Trump administration is seeking to fast track environmental reviews of dozens of major energy and infrastructure projects during the COVID-19 pandemic, including oil and gas drilling, hazardous fuel pipelines, wind farms and highway projects in multiple states, according to documents provided to The Associated Press.

The plan to speed up project approvals comes after President Donald Trump in June ordered the Interior Department and other agencies to scale back environmental reviews under special powers he has during the coronavirus emergency.

More than 60 projects targeted for expedited environmental reviews were detailed in an attachment to a July 15 letter from Assistant Interior Secretary Katherine MacGregor to White House economic advisor Larry Kudlow.

The letter, obtained by the Center for Biological Diversity through a freedom of information lawsuit, does not specify how the review process would be hastened. It says the specified energy, environmental and natural resource projects “are within the authority of the Secretary of the Interior to perform or advance.”

Included on Interior's list are oil and gas industry proposals such as the 5,000-well Converse gas field in Wyoming, the Jordan Cove liquefied natural gas terminal in Oregon, and the Mountain Valley natural gas pipeline in Virginia.

Other projects targeted for quick review include highway improvements in South Carolina, Georgia, Florida and other states; storm levees and wetlands restoration initiatives in Louisiana; the Lake Powell water pipeline in Utah; wind farms in New Mexico and off the Massachusetts coast; and mining projects in Nevada, Idaho, Colorado and Alaska.

Environmentalist Brett Hartl said the move to expedite major projects represents a “giveaway" to industries that curried favor with Trump.

“Building an LNG (liquefied natural gas) plant is not going to solve the problem that's happening in the country," said Hartl, government affairs director with the Center for Biological Diversity. “This is where we're potentially going to see environmental harm down the road, because they are skipping steps in the process."

The group sued the government in federal court to force it to release documents related to Trump's order after the group's initial request under the Freedom of Information Act was refused.

MacGregor’s letter noted that some projects had been placed on shorter schedules before Trump’s order. Some of those that were on the list were recently completed, such as last month’s approval of drilling in the Arctic National Wildlife Refuge.

Interior Department officials did not answer questions from the AP on how the environmental reviews are being expedited and whether any rules were being waived. The bid to speed up reviews is in line with the Trump administration’s greater emphasis on reduced regulatory burdens for corporations.

A spokesman for Interior Secretary David Bernhardt said in an emailed statement that the administration was taking steps to improve government decision making while still making sure environmental consequences are “thoughtfully analyzed."

The president’s June order directed federal officials to pursue emergency workarounds of bedrock environmental laws, such as the National Environmental Policy Act and the Endangered Species Act, to hasten completion of infrastructure projects to speed economic recovery. Trump said the action was necessary because the virus had slowed down large segments of the society and brought massive unemployment.