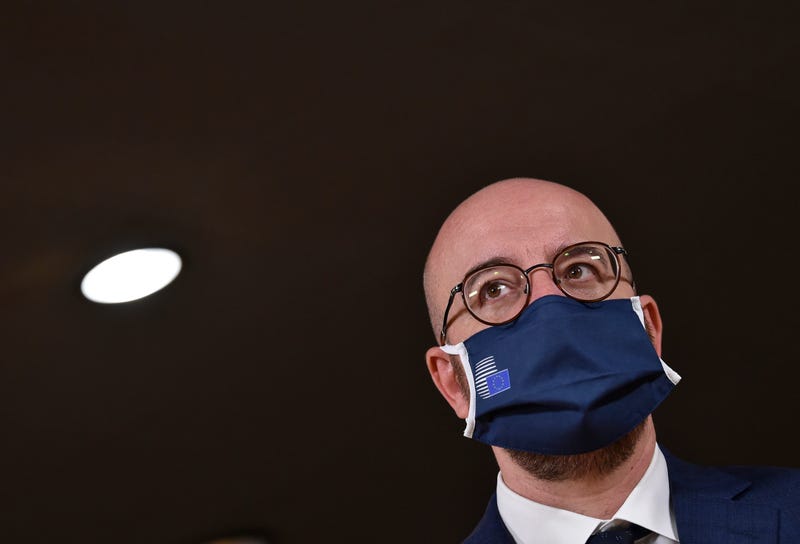 Photo credit European Council President Charles Michel wears a protective mask as he waits for the arrival of Croatia's Prime Minister Andrej Plenkovic, ahead of a meeting on the sidelines of an EU summit at the European Council building in Brussels, Thursday, Oct. 1, 2020. European Union leaders are meeting to address a series of foreign affairs issues ranging from Belarus to Turkey and tensions in the eastern Mediterranean. (John Thys, Pool via AP)
By The Associated Press

BRUSSELS (AP) — European Union leaders are gathering Thursday to try to end an embarrassing standoff that is preventing them from imposing sanctions on senior officials in Belarus accused of falsifying election results and leading the crackdown on peaceful protesters.

The roadblock borders on the absurd. All 27 EU member countries reject the result of the Aug. 9 vote that allowed President Alexander Lukashenko to stay in office. They want a new election and agree that sanctions should be slapped on dozens of officials, perhaps even the man once dubbed Europe’s last dictator himself.

But Cyprus, one of the EU’s smallest member countries, is vetoing the move. It is demanding that its partners in the world’s biggest trading bloc also take action against Turkey for its energy exploration work in disputed waters off the island nation’s coast.

After European foreign ministers failed to break the deadlock last month, the EU's foreign policy chief, Josep Borrell, warned that the bloc’s ability to forge a common foreign policy among 27 countries on issues of concern in wider Europe or around the Mediterranean is on the line.

“If we are not able to do that, then I understand perfectly that our credibility is at stake,” he said.

Before the summit, diplomats said an accommodation might be found. Over dinner, the leaders will have wide-ranging talks about the EU’s troubled ties with Turkey over its drilling in the Mediterranean, its roles in the conflicts in Libya and Syria, and as a source of migrants trying to reach Europe.

Cyprus could be appeased if its partners underline their support in the final summit communique, or in a special statement from European Council President Charles Michel, who is chairing the two-day meeting. The leaders could then give a green light to sanctions against dozens of Belarus officials.

National envoys could then quickly enact the sanctions in coming days, the EU diplomats said.

“Should the dialogue path not yield results, then the EU must be ready to consider other courses of action, such as expanded listings within the framework of the existing sanctions regime,” Lofven was quoted as saying by Swedish news agency TT before the summit, which Lofven won't attend because of his mother’s funeral.

The dispute shines the spotlight on troubling old questions about the EU’s ability to act quickly and with one voice. The leaders will also discuss ties with China, but here too they are divided in how to approach a country that is a major trading partner yet poses serious economic and political challenges.

It’s also possible that divisions will be exposed in other ways, given a worrying rise of authoritarianism in some member countries. A recent EU report on the state of the rule of law — the independence of the judiciary, corruption and media freedoms — has ruffled feathers and could be raised during the summit.

Hungary and Poland are notably angry about the report and an attempt to link countries’ access to certain relatively generous kinds of EU funds to the way they run their democracies.

The leaders will also hold brief talks on Brexit, scheduled for Friday, after the EU’s executive commission launched legal action against Britain for reneging on its commitments in the divorce agreement.

Jan M. Olsen in Copenhagen contributed to this report.