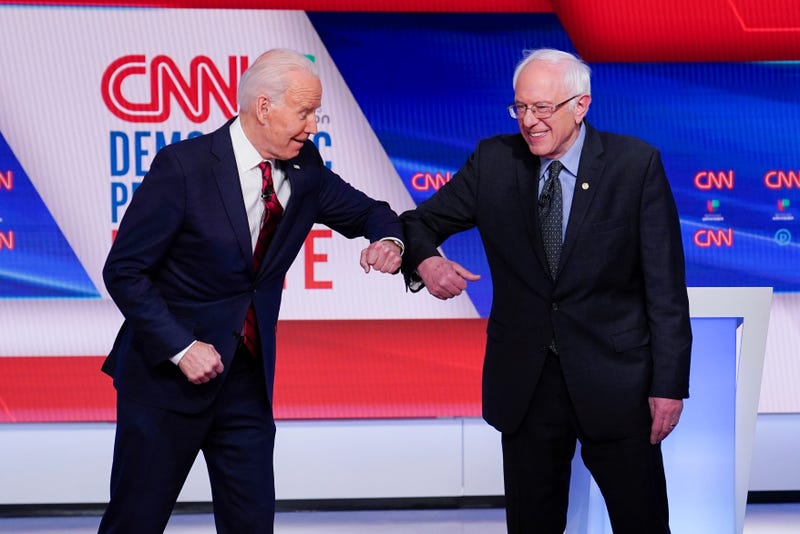 Nuestro PAC is launching a 30-second spot that will begin airing Thursday for two weeks in heavily Hispanic Nevada and in Iowa, another state where the growing Latino population is largely overlooked. Backed by a six-figure ad buy, the spot features Hispanic staffers of Sanders’ campaign saying they worked hard for him during the Democratic primary, “But now, we’re all for Joe Biden, because Biden’s endorsed by Bernie.”

“We’re going to go into states where Bernie just dominated the Latino vote to help lift up Biden,” said the group's founder, Chuck Rocha, who headed the Sanders campaign's Hispanic outreach. “In Iowa, going to Latinos will surprise people ... but they’re there, and we won them by huge margins. And the opposite side of that equation is going into Nevada to shore him up with young Latinos.”

The Biden campaign has acknowledged that its standing with Latinos could use improvement and tried to build a coalition of 20-plus voting blocs to mitigate that — including seniors, Native Americans and another group that strongly supported Sanders during the primary, progressives.

On Tuesday, Biden's campaign unveiled its own ads in English and Spanish highlighting the Latino community. They are airing on television and digitally in Arizona, Florida and Nevada. The ads are also appearing in other states where Latino populations do not get a lot of attention but could play decisive roles at the ballot box — Minnesota, North Carolina, Pennsylvania, and Wisconsin.

Another onetime Biden primary rival, former New York Mayor Mike Bloomberg, has announced $100 million in investment in the swing state of Florida on Biden's behalf, after a recent poll showed Biden garnering less support among Latinos there than Hillary Clinton did at the same point in 2016.

Rocha's organization is instead betting on Sanders' appeal in areas where Latinos backed him the past. He easily won Nevada during the primary and effectively mobilized Iowa’s small but growing Latino population to succeed in its caucus.

That may counter the Trump campaign's efforts to bolster its national outreach to Latinos, especially men. While campaigning Friday in Florida, Trump said, “Biden betrayed Hispanic Americans.” He did not elaborate. The president has also visited Iowa and Nevada in recent weeks, something Biden has not done since the primary.

Sanders is a fierce critic of super PACs. But Nuestro PAC is teaming with the America's Progressive Promise, run by Jeff Weaver and other former top strategists from Sander's presidential campaign, to produce the spot.

“I think 2016 showed us, especially with states like Pennsylvania, Michigan and Wisconsin, that a lot of these minority communities — like Latinos and African American communities — can also be the margin of victory,” said Eileen Garcia, who was national surrogate communications coordinator for Sanders’ presidential campaign and is one of the ex-staffers featured in the ad that begins airing Thursday.

The title “Tio,” which translates to “Uncle,” is a play on the nickname some Hispanic supporters bestowed on Sanders during the primary. The ad will air only on digital media. Nuestro PAC says that's because Latino voters tend not to watch network TV at high rates.

The groups have teamed up for previous ads. One that decried Trump’s handling of the coronavirus pandemic targeted several states, including Michigan and North Carolina.

“Everyone is starting to realize that this untapped community has a lot of potential," Garcia said, “if you just put in the resources to talk to them.”