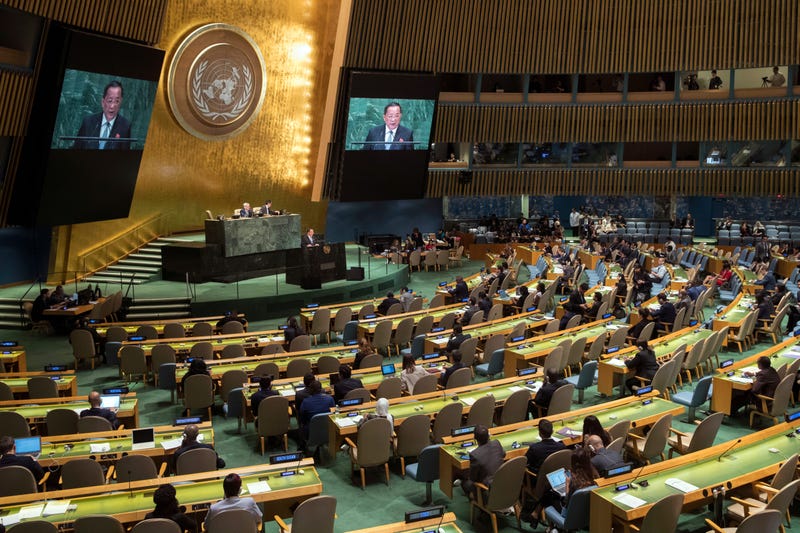 Photo credit FILE - In this Sept. 29, 2018 file photo, North Korean Foreign Minister Ri Yong Ho addresses the 73rd session of the United Nations General Assembly at U.N. headquarters. The United Nations makes a point of welcoming all nations, regardless of political persuasion. But in many ways, there's a love-hate relationship between the North and the U.N. One important thing the North gets from the U.N. is a direct point of contact with the 192 other member nations, including a host of countries that would be loath to send their diplomats to pay homage in Pyongyang, pre-eminent among them, the United States. (AP Photo/Mary Altaffer, File)
By The Associated Press

TOKYO (AP) — Hermit Kingdom? Not quite.

To pay close attention to North Korean diplomacy is to notice the many ways it upends the stereotype of the isolated, nuclear-armed wildcard of Northeast Asia.

Yes, the country’s propaganda services are prone to rhetoric meant to convey a sense of towering fury, mostly for domestic consumption. But before the coronavirus outbreak sealed its borders, North Korea’s state media reported on a steady stream of select foreign diplomats, academics, journalists and delegations trooping up to the capital, Pyongyang.

Along with scattered embassies throughout the world, the North also has a permanent mission at the United Nations in New York, where one of its diplomats will dutifully, if virtually, join other world leaders speaking at the annual U.N. General Assembly.

The United Nations makes a point of welcoming all nations, regardless of political persuasion. But in many ways, there’s a love-hate relationship between the North and the U.N. And it raises a lingering question: What, exactly, does North Korea get out of membership in the United Nations?

On the one hand, the world body, with its jumble of nations — big and small, rich and poor, powerful and weak — gives North Korea, which is formally known as the Democratic People’s Republic of Korea, or DPRK, a rare and highly visible platform from which to respond to the criticism it faces. Most of that comes from what it considers the world’s leading bully — the United States — and its allies.

But the United Nations also generates a fair share of that criticism. It puts the North’s diplomats regularly on the defensive as they battle a stream of official reports, investigations and motions that point out the North’s abysmal human rights record, its decades-long, coffers-draining pursuit of nuclear-tipped long-range missiles and other charges of infamy.

One important thing the North gets from the U.N.: a direct point of contact with the 192 other member nations, including a host of countries that would be loath to send their diplomats to pay homage in Pyongyang — the United States pre-eminent among them. The two nations don’t have formal diplomatic ties, and Washington relies on Sweden as its consular proxy in Pyongyang.

This means the North’s U.N. mission in New York is something of a substitute for an official embassy in Washington. When one side needs quick contact with the other, they often use the so-called “New York channel” at the United Nations.

A good example of the importance of the “New York channel” came as the two sides were working out details of the three extraordinary summits between Donald Trump and Kim Jong Un in 2018 and 2019.

With the United Nations, “North Korea gets an excellent venue to work bilateral conversations with every country in the world without having to deploy diplomats in member capitals (at great expense), or have them travel to Pyongyang,” said John Bolton, who has served as both the U.S. ambassador to the United Nations under George W. Bush and as National Security Adviser under Donald Trump.

“The criticisms of North Korea will come anyway, and having a U.N. mission gives the DPRK proximity to media markets and universities in order to respond," Bolton said in an email. He added: "The opportunities for DPRK intell gathering go without saying.”

The usefulness of the United Nations for the North is perhaps most obvious during times of high tension.

In 2017, for instance, when animosity and back-and-forth threats between Trump and Kim had many fearing the possibility of war, North Korean officials used the media at the U.N. to repeatedly respond to Trump, holding several press conferences and reaching out directly to reporters with statements.

It’s true that quite a lot of what comes out of the U.N. is not to the North’s liking, and its diplomats have stormed out of gatherings critical of the country’s human rights, considered among the world’s worst. But then they’ve also used the body to amplify their side of things.

Of course, North Korea would have more vibrant and substantial diplomacy with other U.N. member states if it abandoned its pursuit of a banned nuclear weapons program, according to analyst Chung Eunsook at the private Sejong Institute near Seoul.

“When North Korea becomes a non-nuclear state and opens itself up, it can better engage in multilateral diplomacy as a genuine member of the international community,” Chung said.

Part of the North’s approach to diplomacy is the result of its turbulent history, and the outsized role the United States and the United Nations play in it.

North Korea was born when the Korean Peninsula was liberated from Japanese colonialism at the end of World War II, only to be forcibly divided into a Soviet-backed north and U.S.-supported south. Three years later, North Korea and South Korea became nations. Two years after that, in 1950, North Korea sneak-attacked the South to start the bloody three-year Korean War. That drew in China on the North’s side and the United States and a host of other nations fighting under the U.N. flag on the South’s.

That war has never technically ended, and the line between the North and South is the most heavily armed border in the world.

These days, aside from the North’s operations at the U.N., there’s little reason to expect the kind of diplomacy that came in 2018, with Kim Jong Un meeting with leaders from the United States, Russia, China, Vietnam and South Korea.

Kim is facing domestic crises on several fronts: a crumbling economy battered by unrelenting sanctions; a ragged infrastructure that’s been pummeled by a string of typhoons; and the COVID pandemic, which has caused North Korea to seal its borders even with China, its economic lifeline.

Still, the U.N. speech at the General Assembly next week will be an opportunity for the North to take to the world stage and express its own vision of nationhood — the storyline of a proud, beset people who have been forced to embrace nuclear weapons to survive against unrelenting hostility from the United States, South Korea and their allies.

More generally, the speech will be “an attempt to win favorable international opinion,” said Choi Kang, vice president of Seoul’s Asan Institute for Policy Studies. And that ability to reach out and be heard by global hearts and minds — in a way as rare as it is direct — may, when it comes to North Korea's U.N. membership, be the biggest benefit of all.

Associated Press correspondents Edith M. Lederer at the United Nations and Hyung-jin Kim in Seoul contributed to this story. Foster Klug, AP’s news director for the Koreas, Japan, Australia and the South Pacific, has covered Asia at the annual UNGA meetings since 2005. Follow him on Twitter at http://twitter.com/APKlug