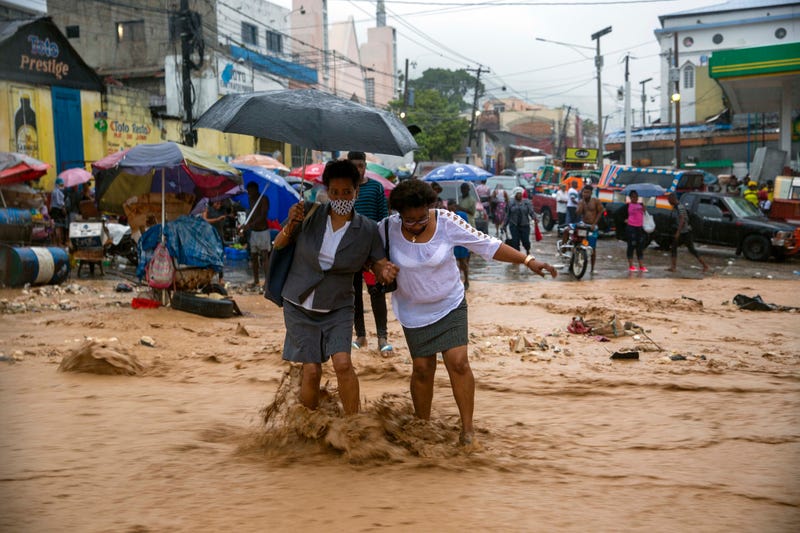 Photo credit Women walk in a flooded street during the passing of Tropical Storm Laura in Port-au-Prince, Haiti, Sunday, Aug. 23, 2020. Tropical Storm Laura battered the Dominican Republic and Haiti and is heading for a possible hit on the Louisiana coast as a hurricane, along with Tropical Storm Marco. (AP Photo/Dieu Nalio Chery)
By The Associated Press

PORT-AU-PRINCE, Haiti (AP) — Marco became a hurricane over the Gulf of Mexico for most of Sunday but weakened back to a tropical storm as it closed in on the Louisiana coast during the night, while Tropical Storm Laura killed at least 11 people in the Dominican Republic and Haiti.

Laura began moving over Cuba late Sunday afternoon, following a path forecast to take it to the same part of the U.S. coast by midweek as a hurricane.

The National Hurricane Center said Marco's sustained winds had decreased to 70 miles per hour (110 kph), though it still warned of life-threatening storm surges and dangerous along the Gulf Coast. Marco was centered about 185 miles (295 kilometers) south-southeast of the mouth of the Mississippi River land heading north-northwest at 13 mph (20 kph).

Marco was expected to be approaching the Louisiana shore Monday afternoon before turning westward toward Texas.

Haitian civil protection officials said they had received reports that a 10-year-old girl was killed when a tree fell on a home in the southern coastal town of Anse-a-Pitres, on the border with the Dominican Republic. Haiti's prime minister said at least eight other people died as Laura passed by and two were missing. In the Dominican Republic, relatives told reporters a mother and her young son died after a wall collapsed on them.

Hundreds of thousands were without power in the Dominican Republic as both countries on the island of Hispaniola suffered heavy flooding.

Laura was centered about 125 miles (200 kilometers) southeast of Camaguey, Cuba, late Sunday, and its maximum sustained winds were at 65 mph (100 kph). It was moving west-northwest at 21 mph (33 kph).

It was forecast to move along Cuba's southern coast during Monday.