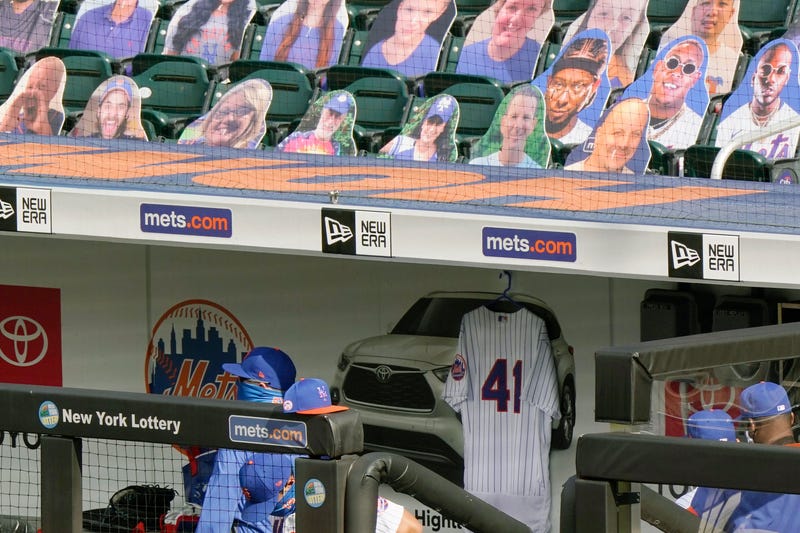 Photo credit Tom Seaver's No. 41 jersey hangs in the New York Mets dugout before the start of a baseball game against the New York Yankees at Citi Field, Thursday, Sept. 3, 2020, in New York. Seaver died on Aug. 31. (AP Photo/Kathy Willens)
By The Associated Press

Starting pitcher Robert Gsellman, his right knee already dirtied, led the Mets from the dugout onto the diamond at Citi Field on Thursday to face the Yankees. Every teammate who followed him had a smidge of dirt in the same spot along the right knee.

What better symbol to honor Seaver, the Mets icon and Hall of Famer whose classic, drop-and-drive power pitcher delivery was imitated by thousands of Little Leaguers in the 1960s and 1970s?

Seaver, known for decades simply as “The Franchise,” died Monday at the age of 75 due to complications from Lewy body dementia and the coronavirus. His death was announced Wednesday night, a few hours after New York beat the Baltimore Orioles - the team Tom Terrific and the Miracle Mets toppled in the 1969 World Series.

“He turned the organization around from a laughing stock ballclub into a complete team instantly,” said Ed Kranepool, who spent his entire 18-year career with the Mets. “You knew every time out, you were going to be a competitive team.”

“It’s a sad day in Metsville,” he said. “We lost our star and our leader.”

Prior to the final Subway Series game of the season -- played at a ballpark without fans during the pandemic season in front of no fans -- the Mets and Yankees both paid their respects to Seaver, who pitched for the Mets from 1967 through 1977 and again in 1983 before spending five seasons as a Yankees broadcaster.

“We’re actually family friends with the Seavers,” Yankees manager Aaron Boone said. “In the ’81 strike, my dad was a National League rep and the Seavers came and stayed with us for like a week. I was 8 years old. Tom and I were out messing around and Tom was on a moped. I actually jumped on the back to get on the moped with him and burnt my calf on the muffler. And I still have the scar.”

Both teams stood in front of their dugouts for a pregame video montage and a moment of silence. After the Mets took their positions for the top of the first, the Yankees joined the Mets in doffing their caps towards Seaver’s 41 hanging along the left field upper deck.

The Mets hung Seaver’s jersey in their dugout. The Seaver Gate at Citi Field -- located at 41 Seaver Way -- was adorned with black bunting and some fans placed flowers at the entrance.

The scoreboard displayed the same graphics used in 1969. Beginning this weekend, the Mets will sport a uniform patch honoring Seaver, whose arrival transformed the club’s fortunes.

“You put a bunch of guys together of varying abilities and you know who the great ones are,” former Mets outfielder Ron Swoboda said. “When you played behind Tom Seaver, you were playing behind greatness. And you saw it almost every time.”

Tribiutes to Seaver poured in from the sports world and beyond. Sports radio station WFAN in New York was filled with calls from fans reminiscing about Seaver, a three-time NL Cy Young Award winner with 311 career victories.

“Baseball lost the best pitcher of my era,” tweeted Orioles Hall of Fame pitcher Jim Palmer, who finished with the same 2.86 ERA as Seaver.

Hall of Fame slugger Hank Aaron recalled meeting Seaver at the pitcher’s first All-Star Game “and I knew he was a special person.”

“He was a terrific pitcher and a wonderful friend. I was lucky to have dinner in his home in New York and in California which I remember fondly,” Aaron posted on Twitter.

Comedian Adam Sandler seemed to speak for many fans and their families when he posted on Twitter: “Tom Seaver. My dad loved him. My brother loved him. I loved him. A hero to so many.”

Mets broadcaster Keith Hernandez, who played with and against Seaver, choked up while talking about him on a pregame show. Fellow announcer and big leaguer Ron Darling said Seaver “was like a big brother to me” during days of playing bridge, doing crossword puzzles and having dinner on the road.

Swoboda is among many who have pushed for a Seaver statue at Citi Field, close to where the pitcher dominated for so long at Shea Stadium.

A statue seems likely by the 2021 season and Swoboda has an idea of how it should look.

“His motion was so iconic,” said Swoboda, who played for the Mets from 1965 through 1970. “I would love to see something out there. I’d love to see them capture his motion from right at delivery, with his knee that close to the mound as he comes through. And its follow-through -- it was so iconic.”