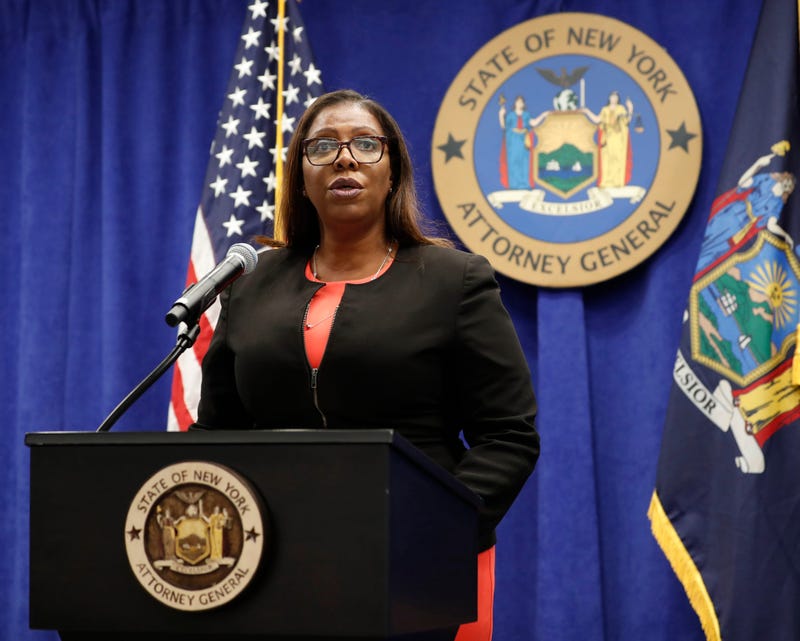 Photo credit FILE- In this Aug. 6, 2020 file photo, New York State Attorney General Letitia James addresses the media during a news conference in New York. On Friday, Sept. 25, 2020, James recommended the New York Police Department get out of the business of routine traffic enforcement, a radical change that she said would prevent encounters like one the year before in the Bronx borough of New York that escalated quickly and ended with an officer fatally shooting a motorist. (AP Photo/Kathy Willens, File)
By The Associated Press

NEW YORK (AP) — New York's attorney general on Friday recommended the New York Police Department get out of the business of routine traffic enforcement, a radical change she said would prevent encounters like one last year in the Bronx that escalated quickly and ended with an officer fatally shooting a motorist.

Attorney General Letitia James, who acts as a special prosecutor appointed to investigate certain police killings, argued that traffic stops for minor infractions often end in violence and that Allan Feliz's death last October after he was pulled over for a seat belt violation “further underscores the need for this change.”

James’ office concluded that the NYPD's use of deadly force was justified but that the sequence of events leading to Feliz's death would never have happened if police hadn't stopped him in the first place. Police further heightened tensions by attempting to arrest Feliz on outstanding warrants for low-level offenses such as spitting, littering and disorderly conduct, James' office said.

Feliz initially complied when an officer asked him to get out of his car, but then jumped back in and tried to flee, James' office said in a report on his death that included the recommendation about police yielding traffic stop duties.

Sgt. Jonathan Rivera then fired a stun gun at Feliz and climbed into the car, warning, "Yo, boss, I am going to (expletive) shoot you,” as Feliz shifted the vehicle into gear and began moving. Rivera shot Feliz once in the chest, killing him.

James' office concluded Rivera was justified in shooting Feliz in part because he feared the vehicle's movement was endangering another officer standing nearby, the report said.

“The officer’s alleged justification is a fairy tale,” said Robert Vilensky, a lawyer for the Feliz family, which is suing the NYPD. “The car which they say was moving was at best moving 2 mph. That wouldn’t knock over a fly.

“The justification is a made-up story to rationalize killing an unmarked civilian,” he said.

The NYPD has a separate unit of personnel who are not officers but direct traffic and hand out parking tickets — but who also have limited interaction with the public. James' recommendation is aimed at officers who stop people for things like speeding, seat belt infractions and other issues.

If police officers are to remain involved in traffic enforcement, James' office said, the police department should drop a policy that encourages officers to arrest any motorist who is found to have an open warrant.

Instead, the report said, drivers with open warrants should be arrested only with a supervisor's approval if an officer had reasonable cause to believe they were a danger to the community.

“It is highly unlikely that the incident involving Mr. Feliz ... would have escalated in the manner it did in the absence of this automatic arrest policy," James' office wrote.