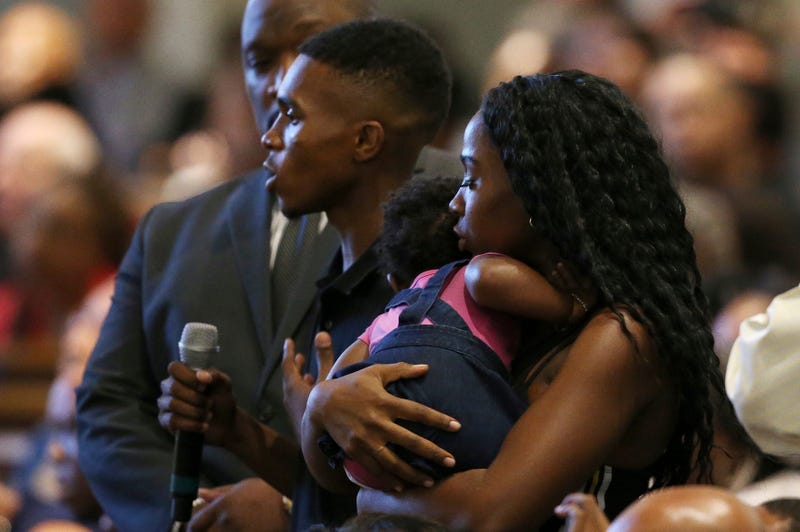 Photo credit FILE - In this June 18, 2019 file photo Dravon Ames, holding microphone, speaks to Phoenix Police Chief Jeri Williams and Phoenix Mayor Kate Gallego, as his fiancee, Iesha Harper, right, holds 1-year-old daughter London, at a community meeting, in Phoenix. The Phoenix City Council will vote Wednesday, Aug. 26, 2020 on a settlement for the Black couple who had police officers point guns at them in front of their children last year after their young daughter took a doll from a store without their knowledge. (AP Photo/Ross D. Franklin, File)
By The Associated Press

PHOENIX (AP) — The Phoenix City Council agreed Wednesday to pay a settlement to a Black couple who had police officers point guns at them in front of their children last year after their young daughter took a doll from a store without their knowledge.

Iesha Harper said at a news conference that she and Dravon Ames will receive $475,000. It stems from a $10 million claim that the couple's attorney, former state Attorney General Tom Horne, filed in June 2019. The claim, a precursor to a lawsuit, alleged excessive force by police and a violation of the family's civil rights.

“I just want to say I'm glad we got justice. It's been hell dealing with my kids and everything that happened," said Harper, adding that her children have been left with anxiety.

City leaders passed the settlement with a 6-2 vote.

“I know the money won’t take away the trauma or the harm that’s been caused, but I hope the children will have a better life for it,” Councilman Carlos Garcia said.

The settlement comes during a national reckoning over racism and police brutality and as violence has erupted at protests in Wisconsin over the police shooting of Jacob Blake, a Black man.

The Phoenix Police Department, in the nation's fifth-largest city, has been criticized for its use of force, which disproportionately affects Black and Native American residents, The Arizona Republic reported. The department also has one of the highest shooting rates in the country.

The payment would be one of the latest by the city over police actions. Payouts in connection to excessive-force or wrongful-death claims have totaled millions of dollars in the last several years, The Republic reported.

The police encounter with Ames and Harper in May 2019 got widespread attention when bystander video spread online. Afterward, the police chief fired an officer and the department required a written report whenever an officer points a gun at someone. The mayor also created an committee to get public recommendations on police reform.

Employees at a store told officers who responded to an unrelated shoplifting case that the couple's 4-year-old daughter had taken a doll. Ames and Harper, who was five months pregnant, didn't know about the doll and had already driven away. Police followed them to an apartment complex.

Ames has said officers didn’t use lights or sirens before walking over to the couple's parked car, with their 4-year-old and 1-year-old daughters also inside.

“Next thing you know, a police officer ... comes up, ‘Open the door,' banging on the window with a gun, saying he’s gonna shoot us in the face, telling us to get out of the car,” Ames said.

In a video recorded by a resident of the apartment complex, officers can be heard yelling and cursing at the couple. No police body camera footage exists.

An officer went to the back driver’s side door but couldn't open it because it was malfunctioning, the notice of claim said. He banged on the window and told Harper, who was holding her 1-year-old, to open the door and put her hands up. She told the officer that the door couldn’t open and that her hands were up.

A second officer then pulled his gun out and pointed it at Ames before pulling him out of the car, according to the notice of claim.

A different video begins with Ames lying on the ground as an officer handcuffs him. He's pulled off the ground and pressed against a police car before the officer kicks one of his legs open. The claim alleged the officer kicked him so hard that Ames collapsed. He also accuses the officer of punching him in the back.

Harper says that after getting out of the car, an officer tried to grab one of her daughters to take Harper into custody. The family said the toddler was injured when the officer pulled her arm.

The couple were released after another officer arrived and defused the situation, the claim said. No one was charged.

music
Everything we know about Billie Eilish's upcoming livestream show
music
How do you get pizza from Ariana Grande? Just vote
music
Phil Collins ex-wife has taken over his mansion with armed security guards
music
Justin Bieber 'super emotional' behind the scenes of his new 'Lonely' video
sports
Jeff Luhnow on Astros suspecting Yankees, Indians, Rangers: 'best way to catch a cheater is to have been a cheater yourself'
music
How 'messing up' a Green Day song led to a blink-182 classic