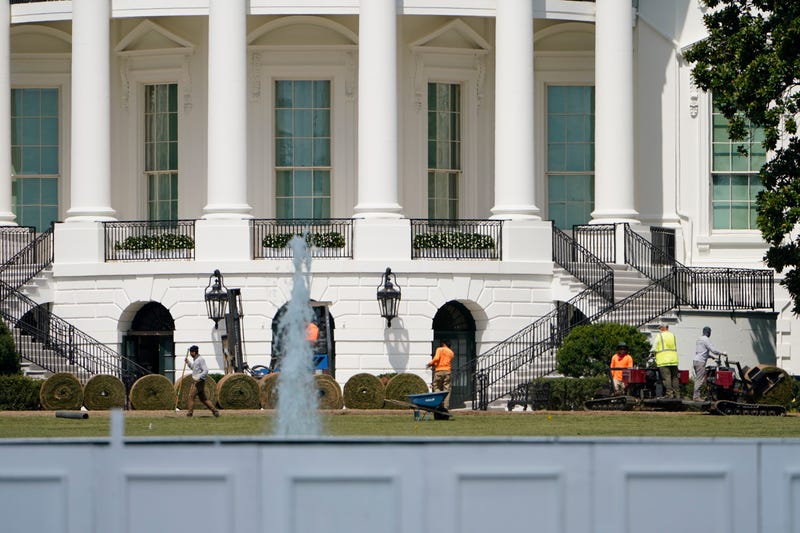 Photo credit Workers lay sod on the South Lawn of the White House, Tuesday, Sept. 8, 2020, in Washington. The White House South Lawn and its iconic Rose Garden are undergoing extensive re-sodding and other work after last month’s Republican National Convention turned them into a muddy mess. Crews have been working to repair damage to the public grounds, including browning of the South Lawn and mud patches in the Rose Garden, after the spaces were used as backdrops for President Donald Trump’s convention events. (AP Photo/Jacquelyn Martin)
By The Associated Press

WASHINGTON (AP) — The Rose Garden has been a muddy mess and the South Lawn marred by brown patches since President Donald Trump used them as backdrops for last month’s Republican National Convention.

Both are undergoing extensive re-sodding as crews work to repair the damage, which was clearly visible this week and last. The Rose Garden repairs come just weeks after the White House completed a major renovation of the garden intended, in part, to improve drainage issues.

“The sod is being replaced at no cost to taxpayers. Additionally, there has been other planned infrastructure work taking place on the south grounds,” said White House spokesman Judd Deere. He added that the work is expected to be completed by early Wednesday or Thursday, barring more bad weather.

The president's reelection campaign is paying for the work.

The damage comes after Trump upended long-held norms separating campaigning and governance by using the White House grounds as the stage for a partisan political event.

First lady Melania Trump delivered her convention speech in the newly-refurbished Rose Garden and the president formally accepted his party's nomination on the South Lawn in front of more than a thousand people seated in rows of closely-packed white chairs, despite the ongoing pandemic.

The Republican National Committee and officials in the East Wing of the White House, which oversaw the Rose Garden renovation, did not respond to questions about the damage.

The White House noted that some sod replacement is not unusual after major events, including the annual Easter Egg Roll and major state visits, especially if heavy foot traffic follows heavy rain. And since the sod is already being replaced, some other upgrades are being done as well.

The president delivered his televised acceptance speech the final night of the convention in front of an audience of about 1,500 people, according to organizers. The event featured a large stage, giant screens and other equipment set on the South Lawn, in front of the majestic Washington Monument, and was capped by an elaborate fireworks show.

The first lady held her event earlier in the week in the Rose Garden following extensive renovations that included the removal of crab apple trees, the addition of a 3-foot (0.91-meter)-wide limestone walking path, as well as what had been described as improvements to the garden's drainage and broadcasting infrastructure. That work was paid for with private donations and approved by the Committee for the Preservation of the White House.

Officials noted that setup for the event began just after the renovation and after a span of heavy rain, and suggested that the new sod may therefore not have taken as well as it should have. The day of her speech, Astroturf was placed over the garden lawn because it was deemed a swampy mess.

Since the convention, the White House has avoided using the Rose Garden and South Lawn for public events. A Labor Day press conference was held in an unusual location — the White House's North Portico — because of the construction. The president has been driving to the Joint Base Andrews for his trips out of town instead of taking the Marine One helicopter from the South Lawn because of the ongoing work.

His motorcade has also been loading and unloading along West Executive Avenue or the North Portico instead of the South Lawn driveway, which is currently blocked by equipment. Reporters covering White House events have been led through internal hallways instead of the West Wing colonnade to avoid being shown the mess.