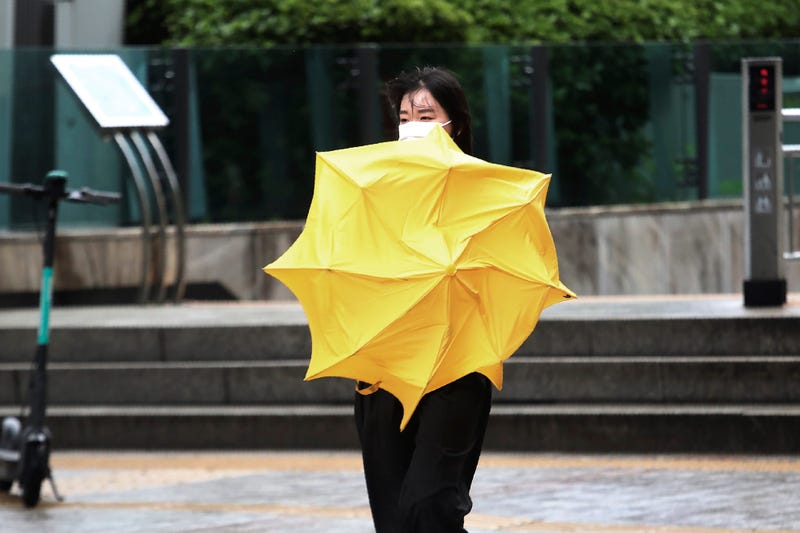 Photo credit A woman holds an umbrella against the strong wind and rain caused by Typhoon Bavi in Seoul, South Korea, Thursday, Aug. 27, 2020. Typhoon Bavi that grazed South Korea and caused some damage has made landfall in North Korea early Thursday. South Korean authorities said there were no immediate reports of casualties, and North Korea has not reported any damages. (AP Photo/Ahn Young-joon)
By The Associated Press

SEOUL, South Korea (AP) — A typhoon damaged homes and other buildings, flooded roads and toppled utility poles Thursday on the Korean Peninsula, with neither country immediately reporting casualties as the storm passed by the North's capital.

Typhoon Bavi had maximum winds of 115 kilometers (71 miles) per hour and was passing near Pyongyang after making landfall in a western coastal region of North Korea that is a major source of farming and fishing, South Korea’s weather agency said. It was forecast to weaken to a tropical storm in the next 12 hours.

The North’s Korea Central TV showed footage of snapped trees and utility poles and flooded roads while also reporting damages to houses and public facilities in North Hwanghae and South Hwanghae provinces, where the typhoon made landfall. Roads were also flooded in the city of Nampo, which is closer to Pyongyang.

The broadcaster and other state media outlets made no immediate mention of any injuries or deaths in North Korea.

In South Korea, the Ministry of the Interior and Safety said there was no immediate reports of casualties, despite damage to buildings, walls, roads and other structures. The Korea Meteorological Administration warned of strong winds continuing in Seoul and the central region through the morning.

Power was knocked out in 1,633 South Korean homes, about half on the southern resort island of Jeju, which was the first part of the country to be hit by the typhoon on Wednesday. Most power was restored in the morning.

More than 430 domestic flights in and out of Jeju and the southern mainland city of Busan were canceled. South Korean authorities also halted some railroad services, shut down public parks and sea bridges and moved hundreds of fishing boats and passenger vessels to safety.

Workers in Seoul and other major cities were restoring makeshift coronavirus testing stations that had been dismantled out of concerns that the tents and booths wouldn’t have withstood the strong winds.

The North’s official Korean Central News Agency said earlier this week that leader Kim Jong Un had called for thorough preparations to minimize casualties and damages from the typhoon. Fishing boats were moved and other protective measures were taken to help buildings, farms and railroads withstand the storm, according to state media.