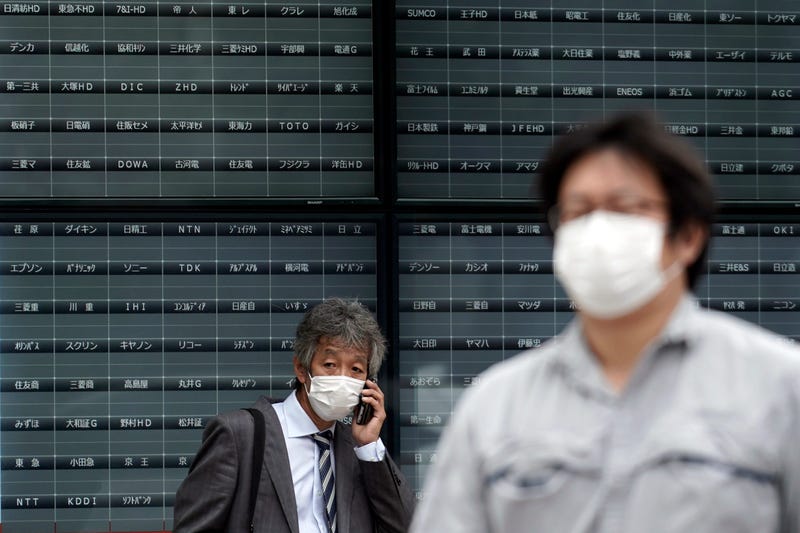 Photo credit A man stands in front of a blank electronic stock board supposedly showing Japan's Nikkei 225 index at a securities firm in Tokyo Thursday, Oct. 1, 2020. Trading on the Tokyo Stock Exchange was suspended Thursday because of a problem in the system for relaying market information. Most other Asian markets were closed for national holidays. (AP Photo/Eugene Hoshiko)
By The Associated Press

TOKYO (AP) — Shares were higher in Europe and Asia on Thursday, while trading on the Tokyo Stock Exchange was suspended due to a technical failure in its computer systems.

The Tokyo Stock Exchange announced it plans to resume normal trading on Friday. Officials said trading was halted early Thursday because rebooting the huge system after the malfunction would have caused confusion.

TSE President Koichiro Miyahara repeatedly apologized for the disruption to trading on the world's third largest exchange, where about 70% of brokerage trading both by value and volume is by foreigners.

Official statistics showed the jobless rate rose to 8.1% in the 19 countries that use the euro currency in August, up from 7.9% in July.

In Asia, Australia's S&P/ASX 200 gained 1.0% in the afternoon to finish at 5,872.90. Trading was closed in South Korea, Hong Kong and mainland China for national holidays.

The outage on the exchange eclipsed Japan's main economic news of the day, the first improvement in manufacturing sentiment in three years, despite the pandemic.

The quarterly Bank of Japan “tankan" survey showed the headline measure for sentiment among large manufacturers stood at minus 27, an improvement of seven points from the previous survey that came out in July.

The tankan measures corporate sentiment by subtracting the number of companies saying business conditions are negative from those responding they are positive. Before Thursday's report it had declined for six straight quarters.

Asked how officials planned to take responsibility for the trading outage, a common question in Japan when troubles occur, Miyahara said the exchange would focus on fixing the problem before considering such issues.

He said the exchange will investigate to assess any losses caused to investors.

Previous outages occurred when the “Arrowhead" system created by Fujitsu to handle its electronic trading became overwhelmed with too many orders at one time.

Officials said the latest problem was also in a Fujitsu product, but the exchange does not intend to seek damages from the company.

Investors are turning their attention to American jobs numbers due out Friday and watching to see if Congress and the White House can iron out deep partisan differences to agree on fresh help for the U.S. economy.

In energy trading, benchmark U.S. crude lost 54 cents to $39.67 a barrel in electronic trading on the New York Mercantile Exchange. Brent crude, the international standard, fell 53 cents to $41.77 a barrel.