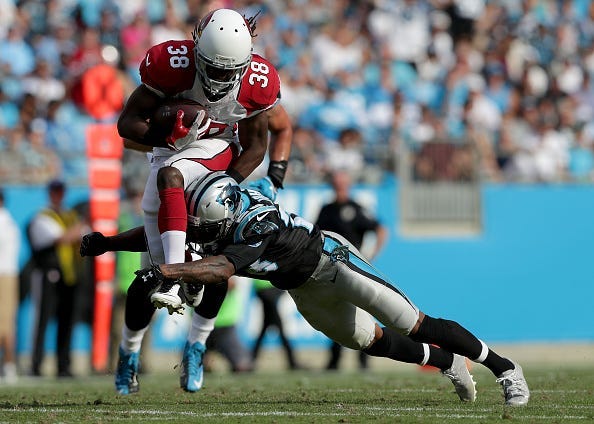 A pair of teams looking for their first win of the season face off Sunday as the Panthers take on the Cardinals in Arizona.

The Panthers will be without starting quarterback Cam Newton, who was ruled out on Friday with a foot injury. That gives Kyle Allen his second career start. And he'll be going up against his former college teammate, Cardinals rookie quarterback Kyler Murray.

Arizona has a new head coach in former college offensive guru Kliff Kingsbury, who brought his air raid offense to the desert. And Murray has been running it to perfection - the Heisman Trophy winner has thrown for 657 yards and two touchdowns.

Murray is also a threat to run – he picked up over 1000 yards rushing at Oklahoma last season.

He's got some excellent receivers, starting with veteran Larry Fitzgerald, who's quickly become Murray's favorite target with 13 catches for 217 yards and a touchdown.

Throw in veteran Michael Crabtree, former Panther Damierre Byrd, and 2nd-year player Christian Kirk, and the Panthers have their work cut out for them.

But James Bradberry and company have been pretty darn good against the pass so far – they rank 3rd in the NFL allowing just 186 passing yards per game.

The Cardinals' running game takes a back seat to the passing attack, but they've got a great back in All-Pro David Johnson.

Of course, the Panthers feature their own star running back in Christian McCaffrey, and he could have a big day against a Cardinals defense that has been giving up all kinds of yards this season – they rank 2nd to last in the league allowing over 458 yards per game.

But they've got talent, with a pair of Pro Bowl linebackers in Chandler Jones and longtime Raven Terrell Suggs.

The Panthers catch a break in that All-Pro cornerback Patrick Peterson is suspended and Robert Alford is injured, but keep an eye out for former Gamecock Tramaine Brock, who starts at safety alongside rookie Byron Murphy.

This is no doubt a key game for both teams, especially the Panthers, who are looking to get back on track after their 0-2 start.

“A win would do big things for this team,” said cornerback Donte Jackson. “We're just going to Arizona to try and get a win.”