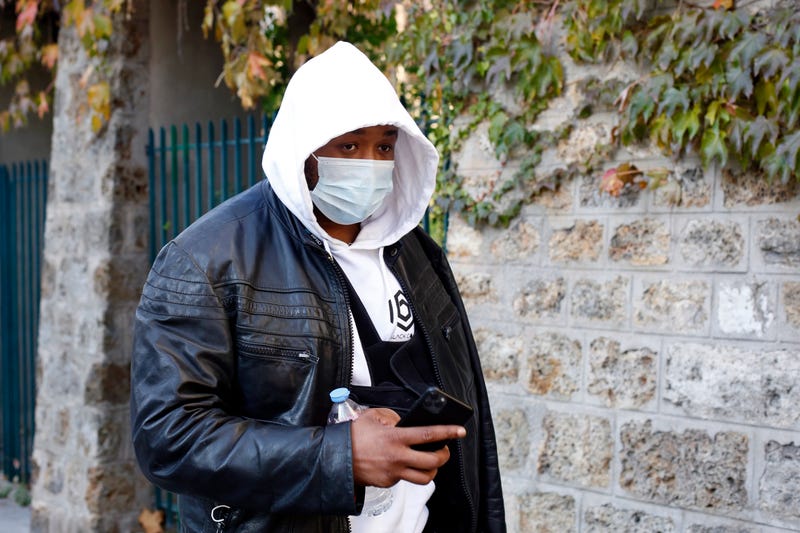 PARIS (AP) — A Black man beaten up by several French police officers said he is seeking justice after the publication of videos showing officers repeatedly punching him, using a truncheon and tear gas against him for no apparent reason.

The incident came as President Emmanuel Macron’s government is pushing a new bill that restricts the ability to film police, which has prompted protests from civil liberties groups and journalists concerned that it would allow police brutality to go undiscovered and unpunished.

Videos first published on Thursday by French news website Loopsider show the violent arrest of a music producer, Michel Zecler, in the 17th arrondissement or district of the French capital on Saturday.

The video images obtained by the Associated Press, both from a security camera inside the studio and filmed by neighbors outside, show three officers following Zecler inside his music studio, where they can be seen repeatedly punching him and beating him with a truncheon.

Zecler told the Associated Press he feels “good” now that “the truth is out.”

“I want to understand why I have been assaulted by people who were wearing a police uniform. I want justice actually, because I believe in the justice of my country," he said.

Zecler said that the officers hurled repeated insults at him, including a very strong racist epithet.

He added that he still does not understand why officers decided to arrest him. He suffered injuries to his head, forearms and legs.

His lawyer, Hafida El Ali, said: “He asked them what they wanted, if they wanted to check his identity. ... They didn't stop beating him, the video of the violence (inside the studio) lasts for 12 minutes.”

At some point the officers called in reinforcements and went outside. They then threw a tear gas grenade into the studio to get those inside to come out, according El Ali.

El Ali said that nine others who were recording music in the studio basement were also beaten.

“Outside they are still beaten up and thrown to the ground and that's the moment when a police officer sees they are being filmed," she said. Then the violence stops.

Zecler was taken into custody.

“I’m obviously scandalized by these images,” Justice Minister Eric Dupond-Moretti said in a television interview. "There are racist police, lawyers or bakers, but to say the police are racist, it's not true.”

Zecler's lawyer stressed the value of the videos in her client's case.

“These videos are essential because initially my client was being detained... for violence against people with public authority," El Ali said. "This is very serious. The reality is that if we didn't have these videos maybe my client would be in prison.”

Darmanin tweeted that the body that investigates allegations of police misconduct, the Inspectorate General of the National Police, known by its French acronym IGPN, is looking into the case, saying, “I want disciplinary proceedings as soon as possible.”

The Paris police prefecture said in a statement that IGPN will seek to establish the exact circumstances surrounding the man’s arrest.

The Paris prosecutor’s office is also investigating the police actions. The prosecutor’s office said Thursday it has dropped the proceedings against Zecler opened the day of his arrest, and instead opened an investigation for “acts of violence by a person in position of public authority” and “false declaration.”

According to Le Parisien newspaper, based on the written record of the officers' declarations the day after the arrest, Zecler drew their attention because he was not wearing a mask — which is mandatory in Paris outdoors amid the coronavirus pandemic. He seemed “nervous” and a “strong drug smell" was emanating from him. They said he was getting “dangerous” toward them.

Zecler's lawyer said: "My client never committed any violence against the police... He did not even defend himself."

It’s the second such police brutality investigation in Paris this week prompted by video footage. The government ordered an internal police investigation on Tuesday after police officers were filmed tossing migrants out of tents and intentionally tripping one while evacuating a protest camp.

That same day, France’s lower house of parliament approved a draft law meant to strengthen local police and provide greater protection to all officers. It notably makes it a crime to publish images of officers with intent to cause them harm. The bill, which enjoys public support after recent terrorist attacks, will now go to the Senate.