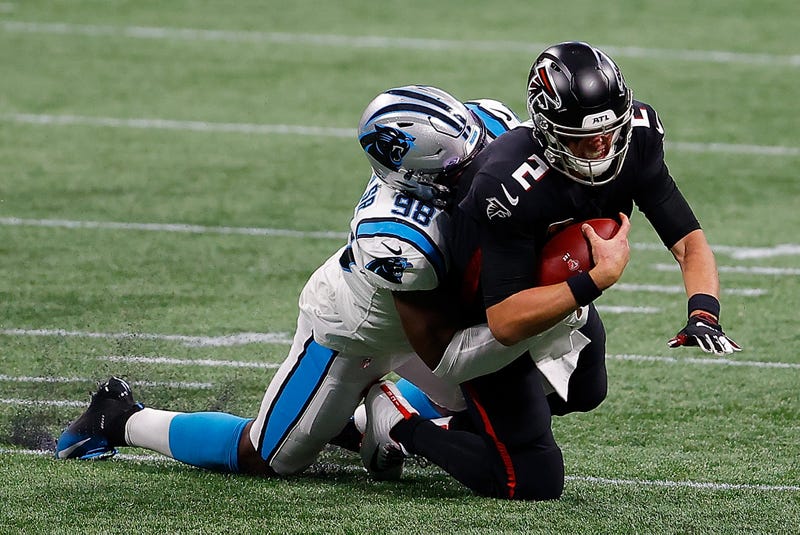 For the second time in less than three weeks, the Carolina Panthers (3-4) take on NFC South rival Atlanta Falcons (1-6), this time in a primetime matchup at Bank of America stadium on Thursday night. (8:20 p.m., Radio: WBT)

The Panthers are coming off a close 27-24 loss to the Saints last Sunday, while the Falcons blew yet another lead, losing 23-22 to the Lions on an 11-yard touchdown pass from Matthew Stafford to ﻿J.J. Hockenson as time expired. That dropped the "Dirty Birds" to just 1-6 on the season, but don't be fooled by that record. The Falcons have a ton of talent on both sides of the line and nearly won the Week 5 matchup against the Panthers at home.

Immediately following the week five loss to the Panthers, Falcons owner Authur Blank fired Dan Quinn and promoted defensive coordinator Raheem Morris to interim head coach. Atlanta has also gotten some injured players back, including star receiver Julio Jones. The 10-year veteran has 16 catches for 234 yards and two touchdowns in the past two games, and is looking like his All-Pro self of old. “The best wide receiver in the game,” said Panther safety Tre Boston. “He's nice, he's a great player.”

So is veteran quarterback Matt Ryan. The former MVP ranks as the NFL top passer with nearly 2,200 passing yards, and has thrown 12 touchdowns with just 3 interceptions. But Boston and the Panthers defense remain solid against the pass, allowing just 227 yards a game, 10th-best in the league. Defending the run has been more difficult – and the Panthers will face a great running back Thursday night in All-Pro Todd Gurley.

The former University of Georgia standout picked up 121 yards and a touchdown against the Panthers in their first meeting, and if one thing stands about Gurley on film, it's that he's tough to defend. “He can get the defense committing to one gap and then bounce to the next gap,” said Panther linebacker Brian Burns. “That's something he does really well. He can really sell one gap you think he's going to hit, and then bounce right out of it and make a big play.”

Limiting big plays has been a problem for the Falcons defense, which continues to rank near the bottom in the league in total yards and passing yards allowed. Atlanta's "not-so-dominant" 'D' gives up nearly 30 points a game to their opponents. And they seem to come up with new ways to lose games every week. Although, one thing the Falcons have done consistently is stopping the run. They give up an average of 92 yards on the ground per contest, which currently ranks sixth in the NFL.

Several key players have been injured, but starting safeties Keanu Neal and Ricardo Allen are both healthy again. Veteran defensive tackle Grady Jarrett is a force on the front line, and linebacker Foye Oluokun is having a great season – he leads the team in tackles and has three of the the Falcon's six forced fumbles. “Honestly, this is a team that plays fast,” said Panther quarterback Teddy Bridgewater. “They're flying around. You feel those guys when you watch the tape. We can't let them come out and dictate the flow of the game, and we've got to be the more physical team.”

This does not exactly look like a must-see game for the Thursday night offering. But, as awful as the Falcons' record is, they have been in most of the games they've played, including holding late leads in three of the seven games.

And you can't discount the rivalry factor. No doubt the Falcons would love to knock off their division foes - they've done that in five of the last six match-ups between these teams. Add all that up, and you've got a dangerous team.

“It's one of those deals where you watch their games and they're in these games,” said Bridgewater. “They may have the lead or they may be playing from behind but it's a team that won't quit, they won't go away. So we understand that it's going to take all four quarters to win this game.”