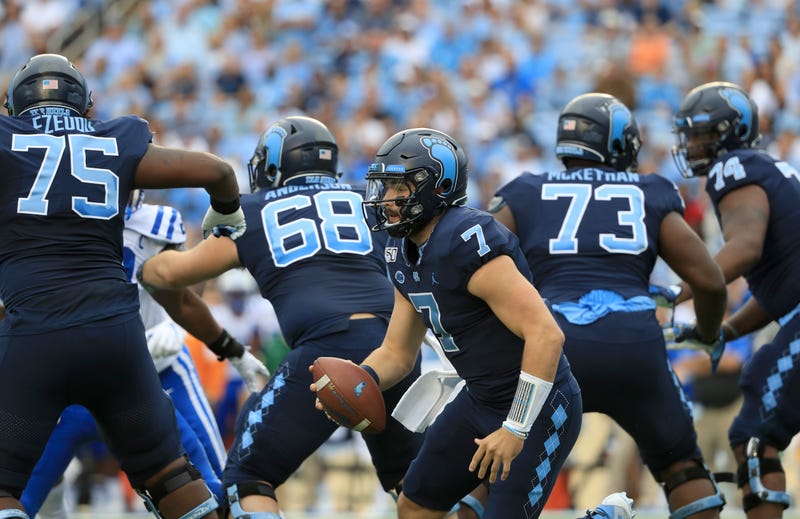 It's another rivalry game for North Carolina, who is coming off back to back games against NC State and Virginia. Up this week is cross-town rival Duke - the Tar Heels head to Durham to play the Blue Devils with the Victory Bell on the line. Kickoff is set for noon on WBT.

The Heels are struggling right now. They've lost two of their last three games and have gone from a number five national ranking to out of the polls following last week's loss at Virginia.

Of course, Duke isn't exactly a juggernaut this season.  The Blue Devils are 2-5 and tied for last in the ACC with just one conference win.  They are coming off a big win over Charlotte though, and also beat Syracuse a few weeks ago.  Their biggest problem has been their offense, which has been inconsistent under first year starting quarterback Chase Brice.  The Clemson transfer is only completing 55% of his passes, he's thrown just seven touchdowns to go with 11 interceptions, and he's been sacked 23 times, four of those resulting in fumbles.  When Brice does get the ball out, his favorite receivers are Jalon Calhoun, Noah Gray and Jake Bobo - each have at least 21 catches and have five touchdowns between them.

The Blue Devils like to run the ball first, and they've got a pair of excellent running backs in Deon Jackson and Mateo Durant.  They've combined for over 1,000 yards and nine touchdowns.  Rushing defense continues to be an issue for the Tar Heels, who let Virginia run at will last week.  One major issue for Duke has been turnovers - they've turned the ball over 23 times this season, that's dead last in the country.

On the other side of the ball, Duke's defense is pretty darn good, ranking 34th in the country.  The Blue Devils have a pair of dominant defensive ends in Victor Dimukeje and Chris Rumph.  They each have a league-leading 7.5 sacks on the season.  That's not good news for a UNC offensive line that has allowed 19 sacks this season, 12 in the last three games.  “They've got two really good pass rushers, and we've had trouble protecting the passer,” said UNC coach Mack Brown.  “So we've got our hands full this weekend.”

If the Blue Devils go after quarterback Sam Howell and shut down the passing attack, they'll have their hands full with UNC's dynamic running back duo of Michael Carter and Javonte Williams. The pair has picked up nearly 1,300 yards and 14 touchdowns this season and will definitely challenge the Duke defense.

Special teams is also something to watch in this game.  That's an area that has plagued the Tar Heels all season long, while Duke ranks 15th in the nation and had a pair of blocked punts against Charlotte last week.

After getting beat by a 1-4 Virginia team, UNC is surely not underestimating Duke, in spite of its 2-5 record. The Blue Devils always seem to play their best football against the Tar Heels – they've won three of the last four in this series, and have lost to UNC just one time in Durham since 2011.  And while it's not basketball, this is still a rivalry.  So no doubt the Tar Heels will be taking this game seriously and looking to get the ship righted.  I say UNC gets it done and brings the Victory Bell back to Chapel Hill.